The West Virginia University men's basketball team travel to Pittsburgh to face the Dukes of Duquesne in the CONSOL Energy Center.

The ESPN Film "Fab Five" included a story about how Bill Cosby faxed a letter to the Michigan team and their coach fictitiously included a paragraph saying if the Wolverines made the Final Four, they would be on The Cosby Show. Well, that never happened. Cosby did, however, stop by the Duquesne team bus in November according to the Duquesne freshman Quevyn Winters. 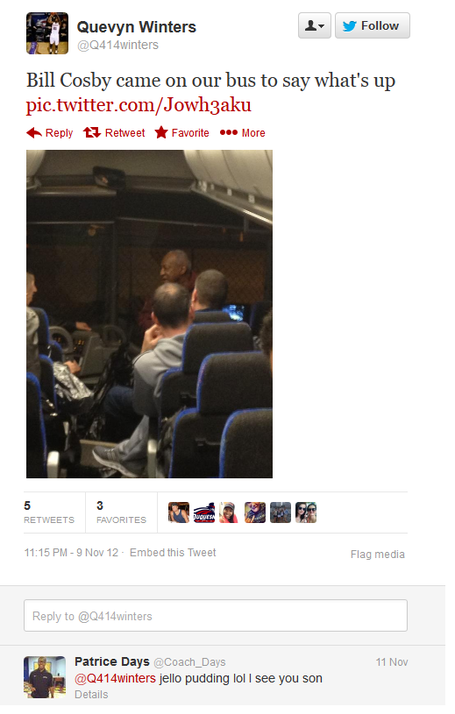 And, yes, I included that Twitter response because it made me laugh. Hopefully for their sake, Bill Cosby didn't hear that one of their players was cursing on the court and he was just giving them a helpful talking-to. Either way, I would assume there was a lot of this:

The Hokie game at the Coliseum was awesome, but the box score doesn't necessarily look like a Huggins team. While, yes, the Mountaineers out-rebounded Tech 49-38, WVU's (absolutely clutch) ten three-pointers essentially kept them in the game. Those threes often came from the 23 offensive rebounds including seven of those from Kevin f--king Noreen. Noreen's performance is something that needs to be more normality of this Mountaineer team is going to make noise going forward to Duquesne, Michigan, and the Big XII schedule.

That being said, Duquesne walks into one of their featured games of the season and always look forward to trying to knock off the Mountaineers. They game Georgetown a pretty good fight back in November, but just got their Dukes handed to them by 21 against Pitt in this very same arena a week ago. Outside of those two, their 5-4 record is a bit padded with small programs. It's worth noting that Duquesne and WVU's stat sheets (via statsheet.com) thus far this year are relatively close considering the handful sample size.

As for their roster, their two starting guards, Derrick Colter (5-11 freshman) and Sean Johnson (6-1 senior) are the Duquesne scoring leaders. The other two consistent starters are Andre Marhold (6-6 senior) and Kadeem Pantophlet (6-7 senior) who do most of the paint work along with a healthy 16 blocks this season thus far for Marhold. While the Dukes keep a 7-footer on the bench most of the game, this means the Mountaineers should be able to push Duquesne around under the bucket. However, I truly believe that this game has much more to do with how WVU will play against Duquesne than vice versa.

The Virginia Tech win, while favored in Vegas, can act as a confidence spring board for this WVU team that, at times, seems to lack identity. Luckily, as the season has gone along, the Mountaineers have shown some great qualities in spurts: hustle, defense, rebounding, transition buckets, and ball-movement. These qualities come with a team that is starting to mesh together and has a bit of character. Again, Kevin Noreen played his ass off against Virginia Tech and hustle is contagious. The greatest news out of all of this is that it is still early. At this point in the season, WVU must keep beating the teams that it should while clipping some good ones along the way. The first part is in Pittsburgh in the CONSOL Center... next is in Brooklyn. Let's get this W and move onto beating the hell out of Michigan.