After seeing Skyfall, I'm all hyped up on shaken-not-stirred malt liquor martinis and I'm ready to whip out my Walther PPK for everyone to see.

Before we dive into a discussion of alcohol and Mountaineer sports, I would like to give a small Smitty Loves Movies review: 1) Yes, Skyfall is worth a watch even with it's inadequate amount of cleavage shown 2) No, Daniel Craig is obviously not as good as Connery 3) Not enough boobs 4) Heineken has hijacked this movie and it is really embarrassing how much sometimes 5) Not enough boobs.

I digress. Finals are upon us and that means my thoughts are scattered between SINR values and Coach Huggins deathly coughs. This week is about Keaton Miles and what he might become, some EDSBS, and a constant frustration that is probably going to get worse before it gets better. Let's do this.

Straight from WVUstats.com, this shows us essentially what we already knew. Flowers wasn't a true starter until his senior year where he averaged a little over 9 points a game. Even though this stat isn't exactly impressive, it's the other side of the court where JFlow excelled. He remains 5th on the all-time WVU career blocked shots list with 157 and should have won the Big East Defensive Player of the Year award in 2011. His true qualities that were that he was indeed a character, but he was the all-time greatest bench cheerleader / Notre Dame taunter. Essentially, I felt that J-Flow was the perfect personality for that whole Final Four team including the showstopping John Wall Flowers dance.

Thus far, Keaton doesn't have any classic taunts or dances. Then again, he hasn't been a key factor in any notable wins, so maybe that's yet to come. As for his stats....

Both are 6'7 and ~210. Texas is a little far compared to Waldorf, but that's out of the scope of this. Miles simply doesn't have the sample size in minutes to truly make this comparison justified. However, it is worth nothing that Keaton has received major praise from Huggins for improving in practice and, hopefully, we will be able to see more of him to truly see if he.... blooms into Flowers.

Sooooo I guess there's a podcast named "My Brother, My Brother, and Me" (ran by Marshall fans?) and is good enough to be featured on Shutdown Fullback. About halfway through, the topic goes from coaching to West Virginians. Worth a listen and it's absolutely true that I hate practically museums regardless of whatever the hell it is about. Also: I guess John Radcliff needs to get on .gifs of Bob Huggins punching people in Sheetz.

3. Morgantown Parking is Bad and It Should Feel Bad

I'm aware that I'm preaching to the choir on this one, but I feel like there needs to be a compilation of how dumb this whole thing really is. First off.... 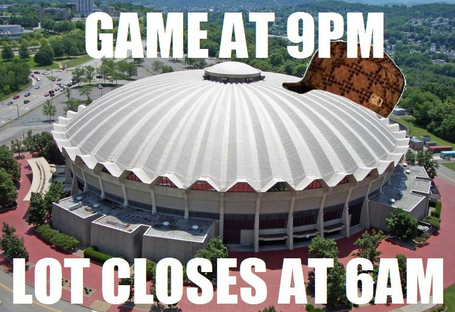 ....this is dumb. Why the hell would you close the lot on at 6am so none of the students who need that free parking for a game that starts at 9pm? Not only that, you ticket students who park on Mon Boulevard during classes AND THEN take away the option for fans attending the basketball game that night to park along the road? This is dumb, WVU.

Then the city of Morgantown decides to one-up WVU's dumb on parking. In April, it was discussed at a city council meeting that the street parking in Sunnyside made it difficult for emergency vehicles (cough firetrucks cough) to make their way. Let's make more streets one way to free up more parking. For anyone that doesn't know, the streets that they're referring to are: McLane, Grant, and Beverly.... and two of those ARE ALREADY ONE WAY STREETS. Are you serious, Morgantown? You're officially on notice. 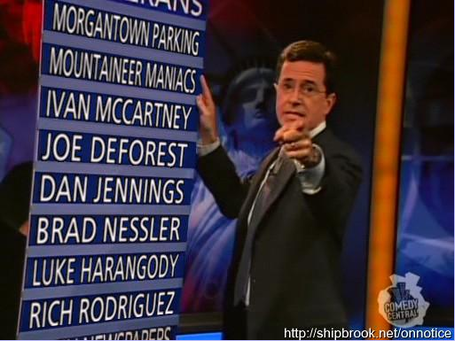