WVU - VMI Preview: Back to Business

The Mountaineers return to the Coliseum Wednesday after a lackluster showing in Orlando to face the Keydets (seriously) of VMI.

Share All sharing options for: WVU - VMI Preview: Back to Business

Not only does Coach Duggar have an excellent name, he also has a pretty stellar Twitter account. First of all, his Twitter Avatar is a picture of him with the "you are screwing me right now, ref" face: 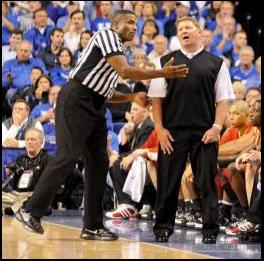 Secondly, the list of people he follows is out of control. It seems he's a huge golf guy, but the amount of LPGA girls he follows is a straight up creepy. Plus, here's a list of notable follow decisions made by Coach Duggar:

Some of those I'm not really sure why anyone male would follow like Adele, Bradley Cooper's fansite, and Dear John Film. Are you serious, dude? Dear John Film? YOU COACH AT VMI AND YOU FOLLOW DEAR JOHN FILM. Others, however, I'm right on board. (Don Cheadle? Why aren't I following him yet? Kate Upton? Approved.)

Outside of the suspect follows and the fact that this dude is a really big fan of cock South Carolina, he seems like a actual bro, so props. Plus, respect for the shout out....

This is going to be an interesting clash of styles when the Keydets come to Morgantown. VMI likes go get up and go with fast paced games around their 6'6 senior forward Stan Okoye. Okoye was named the Big South preseason Player of the Year and he's got some athleticism. That one made SportsCenter's Top Ten plays at #1. Outside Okoye who is VMI's leading scorer, Glasgow, Covington, and Brown round out their main offensive weapons. Rodney Glasgow, the 5'10 junior classic point guard, runs the show and makes good shot decisions on the outside while manufacturing assists for rest of the lineup. DJ Covington, a 6'9 junior center, is extremely versatile with good post skills and the ability of shooting threes. Lastly, the 5'11 guard Brian Brown is their main sniper shooting 40% beyond the arc right now.

Don't sleep on them. They shoot really well, but they absolutely can't rebound due to their lack of size and this is the way to beat them. They're not a strong defensive team either, so the blueprint is to box out and take what they give you. VMI plays fast, so you slow them down. Unfortunately, WVU hasn't completely grown into their half court offense yet, so going against a soft team defensively should help... especially one that doesn't rebound all that well. Stick with the fundamentals, box out, limit easy transition buckets, and the Mountaineers should get their first home win.