The Mountaineers move to the Third Place game of the Old Spice Classic in Orlando, Florida, taking on the newly-acquired conference rival Oklahoma Basketball Sooners.

Share All sharing options for: WVU - Oklahoma Preview: The "Third Place Is Cool, I Guess" Edition 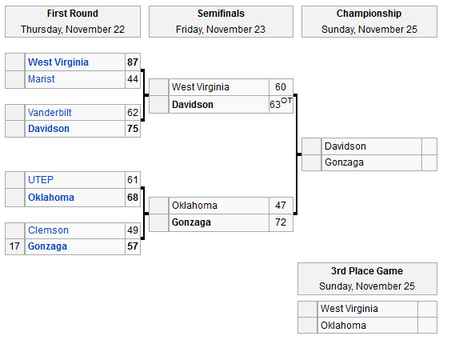 We have an interesting situation here in Orlando with two conferences foes go at it while only playing each other twice in history. This game, while not counting toward the conference record, will provide each team a taste for what to expect in Morgantown early January and Norman late March. This will be especially valuable with the troubles that the Mountaineers are having getting into slumps when the momentum works against them. On paper, these teams are essentially identical.

Both teams have dumptrucked lesser competition and both got routed by Gonzaga. However, these teams are build differently. While WVU is still trying to find an offensive identity, OU runs mainly through Romero Osby, a 6'8 senior forward who leads the team in points and minutes. Osby is the Sooner horse in the front court and will get touches. Outside of that, they play a lot of inside-out game with their 6'4 senior guard Steven Pledger. He can shoot the lights out and will if there isn't a hand in his face. Therein lies a problem for the Mountaineers. Also, it is worth mentioning that the third key player for this Sooners squad might prove to be the most annoying, 6'3 freshman guard Buddy Hield. This kid has already found a scrappy role with Oklahoma and gets a healthy amount of rebounds and good looks at the bucket even though he's one of the smallest guys on the court.

As I mentioned, this West Virginia is going through growing pains of trying to figure itself out. We saw for about thirty seconds that they can run in transition, but are extremely inconsistent in half court offense. Luckily, there are stretches where they fight like dogs on the defensive side of the court which is an attribute that always keeps you in games and shows character throughout the roster. If WVU can figure out how to manufacture points on a regular basis, we have a shot at this. If they can do that while avoiding foul trouble against Osby, adequately guarding Pledger, and out-hustling Hield, this should be a victory. That's a hell of a list, but certainly do-able.