The Mountaineers move to the second round of the Old Spice Classic in Orlando, Florida, taking on the familiar foe of Davidson at 12:30pm.

Share All sharing options for: WVU - Davidson Preview: The No Stephen Curry Edition 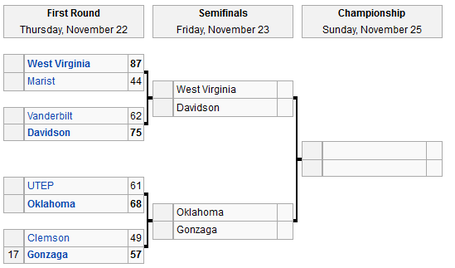 Although most fans are familiar with the Davidson program from the two losses roughly four seasons ago in early season tournaments, there are major differences in both lineups. The Final Four team is long gone and .... so is Stephen Curry. The Mountaineer-killer that was Stephen Curry is off making money in some professional basketball league, so he won't be dressing tonight. Other good news is, as Country Roads mentioned in the post-game article, WVU looked like what WVU is supposed to look like against Marist. There were significant offensive fluidity and the boys seemed to get comfortable in shooting. Although there were moments of immaturity and early-season kinks, the Mountaineers did as much as you can do in a Marist-type game in an invitational tournament: dumptruck the teams that you're supposed to dumptruck. I stated in the comments that half the battle to play in March is beating the teams you are supposed to beat. WVU did that and now looks to play a squad that just got their second win of the year over a lackluster Commodore team. The main focus for this Wildcat team is to take away their best player: De'Mon Brooks. This 6'7 junior forward averages a hair lower than 20 points a game and a lot of those points are from getting hacked in the paint on his way to the rim. The front court for WVU are going to have to shut him down and take away all second chance points. Do that and West Virginia could get themselves their second win of the season.