We want you to design the trophy that will go back and forth between The Smoking Musket and Wide Right & Natty Lite based on the winner of the annual football game between West Virginia and Iowa State.

When the announcement was made that WVU would be joining the Big 12, our new found friends over at Wide Right & Natty Light immediately concocted the idea for a "rivalry" trophy game between our two schools and more specifically, the blogs. The Riot Bowl was born:

We had requested submissions from you the readers before for a trophy image to be exchanged between the blogs to display on the winning team's blog page (and also a loser's trophy if someone is so inclined). Here's what we want: something that appears trophy-like that encapsulates both schools. It's that simple of a requirement. We don't want to stifle anyone's creativity. Here is an example from John: 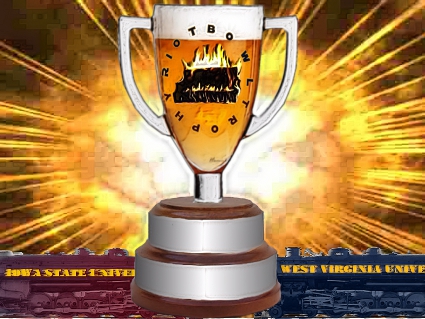 The only caveat we add is that you need to create the image yourself, be it by MS Paint, Photoshop, Gimp, etc. Don't just go out to Google and paste in a picture of a dumpster or couch on fire. I know we have some creative folks out there. Don't let us down!!! Winning submission will get a WRNL and/or TSM T-shirt (both if you want).

Deadline for entries will be 8 pm ET Tuesday, Nov 20. We will then run a poll to help determine the winner on Wednesday.