Smitty's Hurricane Thursday discusses the interwebs, the WVU defense performance thus far under Joe DeForest, and the fact that he's calling a victory on Saturday against the Kansas State Fightin' Erin Brockoviches. 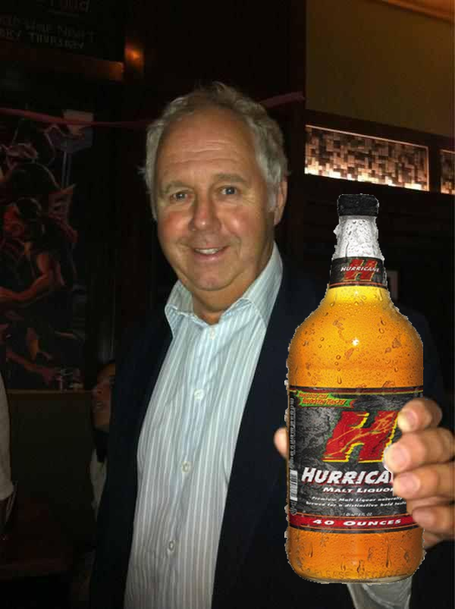 Welcome to the home of "I'm skipping Texas Tech Edition because no one wants to relive that again." This edition is mostly filled with me being angry Hurricane Smitty mode, not the jolly Ian Darke who was there to witness USMNT moving onto the fourth and final qualifying round for the 2014 World Cup. This is usually fueled by my own bad decisions (don't launch golf balls via water balloon launchers from your porch.... they will inevitably go right back into your apartment shattering two bottles of wine....) but this one is mostly a response to the major WVU fan base outcry talking points. In this week's Hurricane Thursday, I'll cover the big one that WVUIE97 already written up about but I feel like hammering it home again, the Mountaineer defense along with Joe DeForest's job thus far, and how I think that WVU is not going to lose Saturday.

So, you guys found the other KState blog that thrives on trolling. Although I appreciate the fact that our fan base is starting to reach out to other sites in SB Nation [editor's note, BOTC, nor any SB Nation site, had anything to do with the trolling], there is still one major part of this community that all of the By-Godders need to understand: it's still a part of the internet. 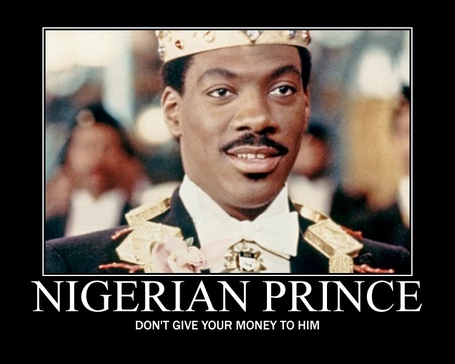 Even if that prince is from Zamunda, don't give your money to him. Along those lines, no, you aren't the millionth viewer of this page. Just in case you are the millionth viewer of this page, I'm not sending you a free, new iPod no matter what that pop up says. These are a part of that Things You Learn To Avoid list on the internet that grows about every three months. From not opening attachments on "MAKE YOUR HOLGO 12 INCHES LONGER" emails to not clicking the fake chat window saying that there are "hot, single, 18-25 year girls in ipaddresslocation=WEST VIRGINIA waiting to meet you!", there is a very important rule that you have heard countless times.

This is a lesson that Cracked listed as #4 for PARENTS TO TELL THEIR CHILDREN. The worst part of this is the fact that it wasn't like they came on our blog, The Smoking Musket, and started flinging insults. They did it IN THEIR OWN BLOG. Kansas State bros can put whatever the hell they want on there just as we can say that we're about to play the Kansas State Fightin' Bob Huggins' Frank Martins Erin Brockoviches. WVUIE97 is right. There is no "crossing the line" when you connect to that router. If there is no line for the Westboro Baptist Church, do you think there is a line when it comes to sports? 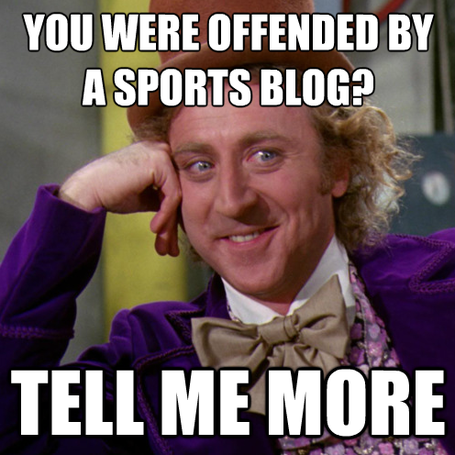 So, what are you going to do about it? Write a letter to the NCAA where that organization has absolutely nothing to do with SB Nation? Excellent idea. How many times has Ford Motor Company answered your letters about those parking tickets you've accrued? There is one thing you can do: save up that voice of yours, go absolutely ridiculous in Milan Puskar when the team needs it, and support the team when they need it the most instead of bashing them. Speaking of which.....

2. Lay off the Defense, DeForest

I said I wasn't going to revisit the Texas Tech game.... I lied. So, remember last week when we lost 49-14? Yeah, it sucked. Even Dana said that we were outplayed in all three phases of the game and that is exactly my point. That 14 on the scoreboard is just as much of a losing performance as giving up 49. Even with that, the Mountaineer defense unit kept the Red Raiders to two scores while causing two turnovers in the second half. They came out at halftime and held Tech scoreless for ten minutes providing our offense three straight drives without a growing point deficit. Our defense provided Geno and the boys a way to get back into the game. Think about that for a second: our fan base is calling for a first year defensive coordinator's job when that exact same unit kept us in the game in the 3rd quarter. Even when a pick was negated by a neutral zone violation, the defense comes out and forces a fumble. They did the damn thing in the second half and, if you want to bash the players on Twitter and Facebook while calling for Joe DeForest's job when giving up TDs, you have to give credit where it is due and praise when our defense holds.

Now, I'm not saying they're perfect. I'm not saying they're great. I'm certainly not saying they didn't give up 35 in the first half. I am saying, however, that they have improved and will continue to improve in a brand new system against the best offenses in the nation. We knew what we were getting into and we don't need all this negative energy surrounding the unit that will be showing Optimus Klein the wood on Saturday.

3. There is No Way We're Losing Saturday 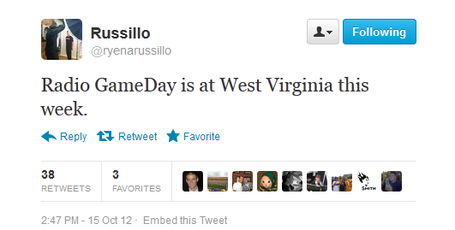 On top of all that, we have a real opportunity here. We have the chance to send a statement saying that last week was just a bad game. We can show that we do belong in the national spotlight and Geno sure as hell belongs as the Heisman front runner. It's a chance for our wide receiving corps to make up for drop after drop last week and take a few to the house. Plus, Studman is ready to roll. 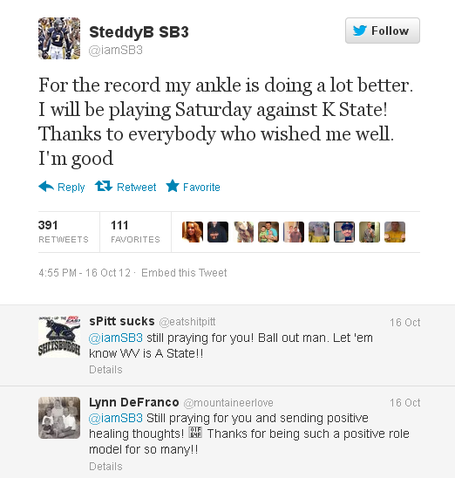 On the other side of the ball, Dana was challenging the defense of not hitting and making the play enough in the first half against TTU. Luckily, we aren't going against a high powered pass offense, but a Wildcat offense (literally) that we are much more built to stop with much better matchups. How many times to you thing Messiah Bruce is going to introduce himself to Klein in the running hole? How about another Darwin Cook forced fumble? As for the secondary, what better way to hush the pundits than to have wheel route pick-six'd?

I'm drinking the kool-aid this week. Prime time game under the lights of Milan Puskar Stadium. We have the conference leaders coming out to play and they sure as hell have no idea what they're walking into. Even though our behavior is to be controlled during tailgating, this is still the same student body that had Sunnyside looking like a warzone after the Texas game. This is the same fan base that sent nearly fifteen thousand into Darrell K. Royal-Texas Memorial Stadium and absolutely let Austin have it all night long. I have a funny feeling about this one. I gotta feeling that Geno is going to absolutely break it off in this Wildcat defense. It's not like we haven't seen it before. We know the Eers can do this. We're only halfway through the season and already got our WTF game out of the way. Let Kansas State be the first to go down on our way to another BCS bowl game. They want a new rivalry? They got one. We're winning this god damned corn/cow conference. We're getting back into the title race. Only 13th in the BCS. Bullshit. It's run-through-the-wall time. Leggggooooogogogooggo.

40 Inspirational Speeches in 2 Minutes (via MBelinkie)