Smitty's Hurricane Thursday discusses our running game feat. Bubba Sparxxx, breaking down that 4th down sack/timeout, and the fact that defense must improve or we are not winning a national title.

Hello again, class. Oh boy, looks like Oliver has called a press conference to tell us how awesome he is again. Few have had as good of a week as Mr. Luck himself, so we'll give him a pass. Welcome back around the home of delayed flights, beers at the Pittsburgh Airport TGI Fridays, and giant Geno heads in Austin. Last week was filled with midterms and a short flight to Texas, so most of the inspiration was Pete's Dueling Piano bar on 6th Street. The only video that I could find that would give it justice would be this one. Oh, and image the place being packed with Mountaineer fans and Country Roads being played roughly around eight times. Take that, Bevo.

As always, I digress. I have some pretty major topics to cover that hatched in Austin while throwing back a few Lone Stars including one that I'm still amazed the Hurricane Thursday crew didn't come up by ourselves. These topics include our running game featuring Bubba Sparxxx, breaking down that 4th down sack/timeout, and the fact that defense must improve or we are not winning a national title. As always, most of this is knee-jerk stuff, but who doesn't make outlandish statements while drinking malt liquor? Let's make some bad decisions, text our ex, and talk football all while meeting some fans who make shirts with our images on them.

First of all: How did we not think of this sooner? The combining Buie and Bubba Sparxxx is a genius move that one of the fellow Eer fans whipped out when #13 was running like a grown ass man. I propose Ms. New Booty to be played in Milan Puskar Stadium after every AB rushing touchdown or when he just gives a lil of the chin music.

I had a write up during first Hurricane Thursday about Alston laying the wood on people and spawning a mancrush surpassing Keanu. Well, now, I just love our running backs. You could tell during the final drive that the Longhorns had had enough of the smash mouth stuff. During an ESPN interview with Manny Diaz, he talks about how the Texas defense did not switch over to the run-stop critical drive mindset because they were getting torched the previous three quarters. I believe it was a combination of both. Our O-line, while giving up a few more sacks than we would like to remember, did a pretty good job on the run game. This is solely because Texas had six men in the box all night and had to pick their poison. Double team Austin, two safeties playing twenty yards off the ball at all times only gives you seven left and I haven't mentioned Studman or J.D. Woods yet. When you have so many weapons, there is always one that is available and handing it off to Buie 31 times sure seems like a good idea when he's averaging 4.3 yards per carry before the Texas game anyway. The psychology of getting beat by Tavon/Studman after taking a couple to the mouth from AB works wonders. Now, when You're In Good Hands with Alston is healthy, we're going to have his spell back already have gone for 200+ against Texas? Yes, please.

Let's set the scene: last two minutes of the 1st Quarter in Darrel K. Royal-Texas Memorial Stadium. Score is tied 7-7 after we force a turnover on downs on a drive fueled by a headbutted blocked field goal. It is 3rd and 10 on the Texas 46 due to refs calling Studman not having possession of the ball (when he clearly did with a foot in-bounds.) Of course, the whole damn Longhorn sideline helped with the call... but whatever. Tavon runs an inside go route and is tackled as he catches the ball four yards short of the first down. 4th and 4. Punt return team comes on which includes the front four of the defense. 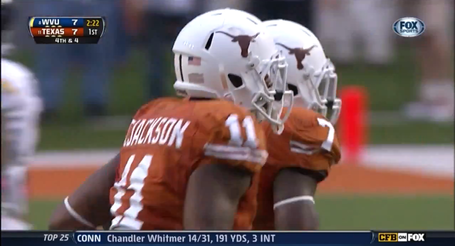 After that, the punt return team doesn't have a clue of what to do. WVU isn't punting and they didn't get a play call for this scenario of five wide. Four guys in the shot can be seen looking at the sideline with a safety and linebacker clearly giving the "wtf are we supposed to do" arms. 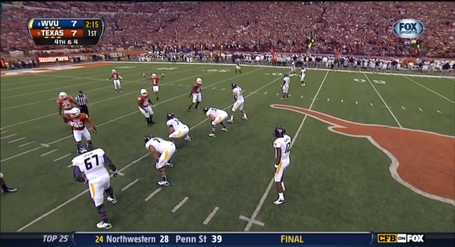 Few seconds later, the linebackers starts to get closer to the line of scrimmage only showing more "seriously, wtf" arms and linemen conversing about how they're just say the hell with it and bullrush. 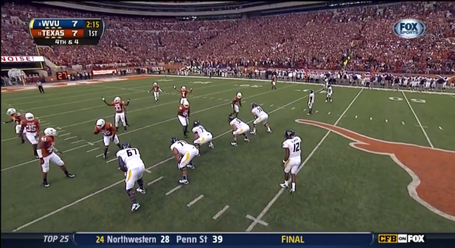 The camera switches to the sideline view with the coach at the bottom trying to wave off the blitz and bring more coverage back then confusion continues with the inside defender near the West Virginia bench giving a final "Idk what the hell to do here guise." Important to note: Tavon has a 14 yard cushion on a 4th and 4. 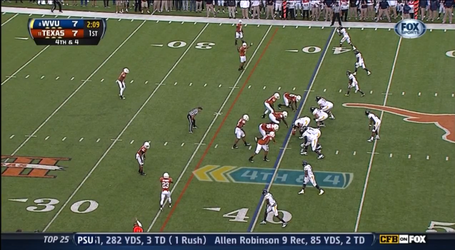 Finally, the defensive coordinator calls the "F--- THIS" timeout. We actually ended having a screen type play toward our own bench drawn up (which would have worked) but the whistles were blown and Geno never really looked to that side. In conclusion: Mack Brown didn't really have anything to do with it, it was a good timeout to take, and thanks for the extra look on what would be your 5-wide defense LOL. 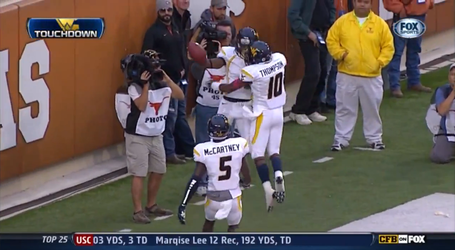 3. Defense Must Get Better

I am of the opinion that our defense has improved throughout the season, but our national title aspirations are only aspirations if we keep having shootout games. This team is built for shootouts, but how many times do we want to throw the dice on our offense carrying the whole load? There is no way we are going to go undefeated by doing that the remainder of the season. If we do have seven more shootout wins, no one will travel to Miami for the whole fan base having died via heart attack.

The odds are, if we do keep winning, the two teams most likely to end up there with us is Alabama and Oregon. Do you seriously want to have a shootout with either of those two teams? Alabama is a damn NFL team and Oregon has been doing this shootout things a hell of a lot longer than we have. It's not that I don't believe in Geno, but I know how this whole football season thing works. There will be a slow start game where we are struggling to get on the board. If the defense gives up a few drives, we are already in the hole... but how much? That deficit must be manageable for the coaches to check the oil and have the boys up and running again. We already saw a glimpse of it against Texas. Ahead 21-7 and we give up four scoring drives in a row. That's good enough against a young Longhorn team, but that won't be good enough when playing the SEC champions.