It's that time of the week once again to vote one off the big board and offer up new suggestions for us to hate as a group. What is it that you hate as a WVU fan?

Pitt (5 consecutive weeks) -- The fact that they hired Tony Gibson as their secondary coach actually endears them to me...just a tad

Football Season Weddings (5) -- We should be clear on this, it's not just weddings during the season, we definitely mean weddings that coincide with WVU game-days.

Tremain Mack (5) -- To this day, I have never heard a stadium so loud get so quiet

Lou Holtz (1) -- He actually picked against Notre Dame in their game against his beloved Skip and the USF Bulls. Maybe he has a heart after all.

1. Refusal to schedule WVU allegedly because of safety reasons. The only true safety reason is his Win/Loss record.
2. As HC of the castrated turkeys he gave us the Vicks
3. This just irks me. He is below that hat: 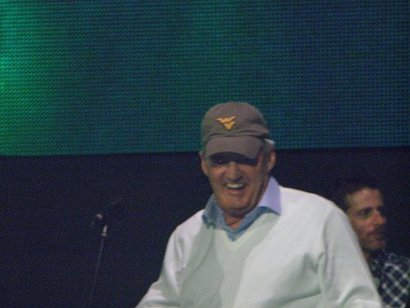 The poll is to vote an item OFF the board to relegation (what least deserves our hate). If an item lasts eleven weeks in a row on the board, it gets elevated to the Hall of Hate. Nominations for the replacement/newest entry for next week go below, in the comments section. Recs and the quality of the hate rant is what gets the nomination confirmed and onto the board for the next week.