WVU's: Where Are They Now? NFL Week 3 Recap

Share All sharing options for: WVU's: Where Are They Now? NFL Week 3 Recap

Going in to Week 3 of the NFL season, some of the stories to keep tabs on concerning former Mountaineers were: would Chris Neild's workload increase? Arian Foster and Derrick Ward were both out for the Texans. Steve Slaton was going to be Ben Tate's backup. Would Robert Sands be active for his first regular season game as a Bengal? Pat McAfee was listed as the emergency quarterback for the Indianapolis Colts. What was the likelihood that he would actually be used as a QB?

I have answers to all of these topics and more. I'll also tell you which former Mountaineer leads the league in a category for his position.

First the big news. As JP Fanshawe told you yesterday, Steve Slaton was cut by the Houston Texans on Tuesday. The Texans have one of the deepest stables of running backs in the league. They have last season's NFL leading-rusher, Arian Foster, and have former 1,000 yard rusher, Derrick Ward, and talented second-year player Ben Tate. Also on the roster at RB was Chris Ogbannaya to challenge for carries. Before this season, Slaton was the center of several different rumors. There were rumors that he would be showcased in the Preseason to increase his trade value. There were also rumors that he would get cut before the end of the Preseason. Early in training camp, Slaton injured his hamstring and did not have a single carry in the Preseason but still made the team. He was cut after playing in the New Orleans game where he had 4 carries for 8 yards. Chris Ogbannaya was signed from the practice squad to take Slaton's spot on the roster.

What happens to Slaton now?

Several teams stand out as possible landing spots for Slaton. One of the teams long-rumored to have interest in Slaton are the Washington Redskins. The Texans use the same blocking scheme as the Redskins under Mike Shanahan, and Slaton would be familiar with the offense. Tim Hightower is the Redskins' current leading rusher, averaging less than 70 yards a game. Another team that could be interested in Slaton is the Kansas City Chiefs. The Chiefs lost starting running back, Jamaal Charles, for the season with an ACL injury. Another team mentioned by ESPN's John Clayton is the Detroit Lions who average less than 3 yards per carry. The Arizona Cardinals could also be in the mix.

Now here is the rundown of the rest of the weekend's games:

Anthony Becht left the game with a leg injury. Becht was playing in his second regular season game with the Chiefs after getting re-signed two weeks ago. Although it hasn't been reported as anything other than a 'leg' injury, K.C. QB Matt Cassell mentioned on 810 WHB on Monday that Becht suffered a hamstring injury. I asked Becht about his leg, and he told me that "it will be fine. I'm good."

Ryan Mundy had 2 tackles for the Steelers. Pat McAfee also recorded a special teams tackle for the Colts. He is now the leading punter/ kicker in the NFL with 3 tackles. He is also 8th in the NFL in punting. McAfee is the Colts 3rd-string quarterback with Peyton Manning injured. Kerry Collins is the starter and Curtis Painter is the backup. Collins went down early in the 4th quarter with a concussion which could keep him out of next week's game against Tampa Bay on Monday night. We were a Painter injury away from Pat McAfee's quarterbacking debut.

Corey McIntyre had a special teams tackle for the Bills who won the game on a Rian Lindell 28-yard field goal as time expired. McIntyre blew up Patriots DE, Kyle Love, on a Fred Jackson 1-yard TD run.

Robert Sands was inactive for the third straight week to begin the season.

Going into this game, Owen Schmitt had not had a carry since 2008. He had 4 carries for 6 yards in the loss to the Giants. He also had 1 catch for 13 yards and 1 tackle. Two of the handoffs came to Schmitt in a goal-to-go situation during the 3rd quarter, both of which were unsuccessful. Schmitt had more touches in the game (5) than DeSean Jackson (3). On the catch Schmitt had, he brought out his inner Jesse Owens and hurdled CB Corey Webster.

Chris Neild entered the game during the 1st quarter and promptly recorded a tackle. He finished the game with 2. The second one is pictured below. 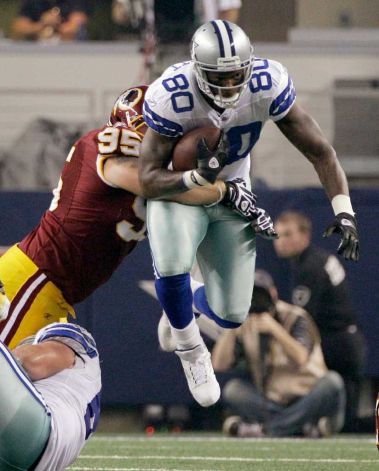