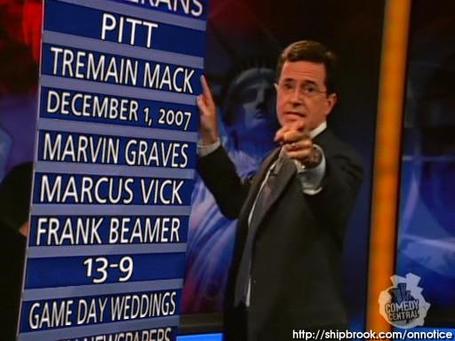 It's that time of the week once again to vote one off the big board and offer up new suggestions for us to hate as a group. What is it that SHOULD NOT be on the board? We want to eliminate one. Who or what will be relegated this week?

We want to eliminate the MOST LIKABLE THING from this list (if you could like any of these). 11 consecutive weeks on the board will get an entry into our HALL OF HATE. Therefore, if you hate Pitt worse than anything, DON'T VOTE FOR IT. VOTE FOR THE THING YOU CAN LIVE WITH THE EASIEST/MOST. For example, my hate for the date of "that game" has waned, and I hate the score taunt more. I'm voting for the date to be removed.

Last Editon's Relegation: Game Day Weddings -- I guess some people don't mind missing WVU games to watch two people pledge misery to each other, even though there are 40 other weekends they could have picked

Tremain Mack (7) -- I still say it was a forward lateral

Marvin Graves (7) -- After Cuse's defection, is he still the most hated Orange? At WVU, I think so.

Marcus Vick (5) -- Marcus Vick is on this list, yet older brother Michael isn't

This Week's Addition: Game Day Weddings - from our resident curmudgeon, The 25314:

Who are the jackwagons that don’t hate having to go to a wedding at the same time WVU is playing a football game? Are you kidding me? We have only 7 home games a year, only 13 total, and you don’t mind missing one to go see to people ruin their lives and they make off like bandits with like 15 blenders??

Marcus Vick only played WVU ONE TIME. He had a solid game and VT won in a forgettable game. How is he even on the list and Mike isn’t?

So you see, even though it got voted off, a great nomination with 5 recs got it right back on the board (starting over on the consecutive weeks, though). Creative and recommended nominations are what gets your gripe on the big board. Post 'em in the comments below. This past week's events surrounding conferences could spawn a few, in my mind at least. But, this is an area of the Musket where the people decide.