Lots of traditions are changing at WVU this year.  There's beer, a new cheer,  a new entrance video, and The Mantrip.  The traditional way of signaling in plays could also be changing.  We don't know this for a fact.  But we're not going to let something silly, like facts get in the way of fun.  To communicate without traditional signals or running the plays in, some schools have begun using what I'm calling signal boards.  One of those schools was Dana Holgorsen's former employer, Oklahoma State.  So we have to believe we'll see them used in a game at some point.  But until then, we'll keep you in the know with our own signal board.  For week one, we present the Marshal-lol Board. 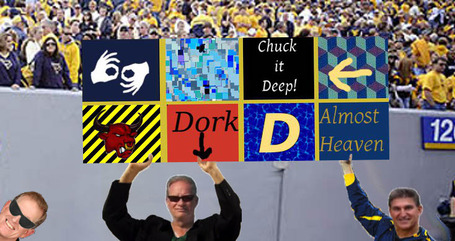 What it lacks in deception, it makes up in star power recognizable faces an...Oh!  So you're a photo-bomer now, Stewart?  Doesn't anyone know how to crop around here?...We'll try to correct that next week.  Just a hint, there's no hidden messages in the block above Chuck's name tag.  Crossing your eyes won't help.

We do need to acknowledge former governor and current senator Joe Manchin.  This was his baby and I don't know if it got him what he wanted or not.  But I'm pretty sure this series hasn't reached Bama-Auburn status yet.  Then there's Chuck Landon.  Without whom our opponents this Sunday wouldn't have a lightning rod of misinformation.  That's respectable in it's own way, I guess.

Until next week...CHUCK IT DEEP!