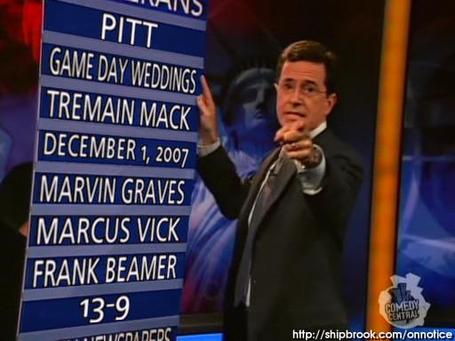 It's that time of the week once again to vote one off the big board and offer up new suggestions for us to hate as a group. What is it that SHOULD NOT be on the board? We want to eliminate one. Who or what will be relegated this week?

Last Editon's Relegation: Lou Holtz - Dr. Lou lasted but one week, only slightly shorter than his stint at South Carolina and the New York Jets combined.

Pitt (6 consecutive weeks) -- How in the bloody blue hell did this get 57 votes to remove it last week?

Game Day Weddings (6) -- The bane of my existence during the fall lives yet on this list.

Tremain Mack (6) -- Anybody have any more information linking him to Craig James and the 5 dead hookers? #FireCraigJames

Marvin Graves (6) -- What more can we say about Marvin? It's not a rhetorical question. I'm asking.

Marcus Vick (4) -- THIS VIDEO is all you need to know about him.

Frank Beamer (1) -- There is mounting evidence that his goiter spawned Bud Foster.

I nominate: two particular numbers when arranged with a dash between them. The first one is generally considered to be unlucky, the number 13. The second is less imposing, but when placed after the first and separated by a dash, it triggers neurological impulses throughout my brain which are much to complicated for me to understand. That number is 9. I realize this is very similar to another item on our hate index, but "December 1, 2007" could possibly slip by in the course of everyday life without making me want to gouge a Pitt fan’s eyes out. But if my daughter’s math homework includes a subtraction problem, say 13 – 9, it’s a safe bet that my daughter will be in need of a new math book. I have no qualms with the number 4, it is simply the difference to a math problem. But the minuend (13) and the subtrahend (9) are pure evil. If my beer league softball team posted a 13 – 9 record, I would have no problem convincing my teammates to immediately forfeit the next game in order to avoid the distasteful experience of driving home as holders of that wretched record. So when in Pittsburgh for a WVU game, the sight of a t-shirt displaying the sequence of numbers and symbols discussed above is one of the most gut-wrenching feelings I can describe. Stupid f*$@in’ game anyway!!

The poll is to vote an item OFF the board to relegation (what least deserves our hate). If an item lasts eleven weeks in a row on the board, it gets elevated to the Hall of Hate. Nominations for the replacement/newest entry for next week go below, in the comments section. Recs and the quality of the hate rant is what gets the nomination confirmed and onto the board for the next week.