Share All sharing options for: The Smoking Musket Hate Index, Episode IV: Return Of The Hate

We at the Musket are bringing hate back. Victories over other teams is simply not enough to keep sports fans united. Hate of other teams, players, coaches, etc., is the glue that binds us together. So, for those that are new to our format here, the concept is simple. We have a list of 8 things we as WVU fans hate. The poll is to vote an item OFF the board to relegation (what least deserves our hate). If an item lasts eleven weeks in a row on the board, it gets elevated to the Hall of Hate. Nominations for the replacement/newest entry for next week go in the comments section. Recs and the quality of the hate rant is what gets the nomination confirmed and onto the board for the next week. It's time to get your hate on... 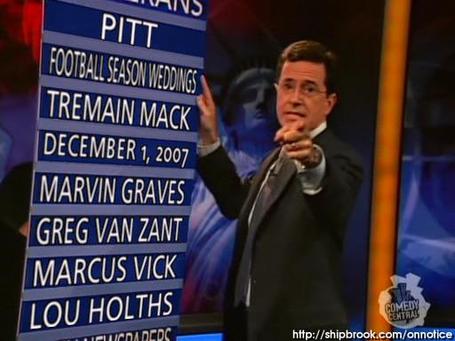 Last Editon's Relegation: Penn State - Not playing each other since 1992 allows for hate to dissipate, apparently.

Pitt (4 consecutive weeks) -- Just as RichRN noted in the comments when we noted that Todd Graham was bringing the "Hold the Rope" concept to Pitt, the evolution of their program is now exactly 10 years behind WVU (including several coaches).

Football Season Weddings (4) -- When I politely asked my sister, just the other day, to promise to avoid this possible circumstance with her likely husband to be, I received a look that would make Medusa proud. No dice.

Tremain Mack (4) -- Little known fact is that Tremain Mack was with Craig James when he killed those 5 hookers (allegedly).

Marvin Graves (4) -- There are few individual names that conjure up such hatred among WVU fans.

Greg Van Zant (4) -- With nothing else happening during the football off-season, you would think Ollie would have looked into this. Oh, wait...

Marcus Vick (3) -- When he was kicked off the team at Virginia Tech, Vick said, "It's not a big deal. I'll just move on to the next level, baby." Since then, he's been accused of statutory rape, been involved in a high speed chase, tested positive for marijuana, and is not within 10 miles of an NFL roster. That's only considered the next level if you're Jesco White. - reprinted from the last edition, because it bared repeating

This Week's Addition: Lou Holths -- I went with Dr. Lou because of the overall combined total amount of recs on the previous edition: from cshult3 - "Not only was he the head coach of Notre Dame when we lost to them in the National Championship in 1988, he ALWAYS dogs WVU on national television AND he is incredibly annoying… screw Lou Holtz. He deserves a permanent spot on the hate index." and from MtnEer_in_SC - "I hate Lou not only for all those reasons that cschult3 lists, but also because Lou was born in West Virginia, which makes him dogging us on national TV even worse."