Share All sharing options for: Countdown To Mountaineer Kickoff 2011: GameCon 15 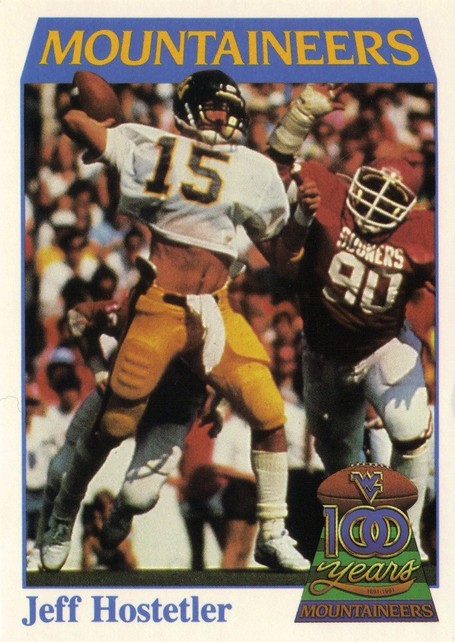 After starting his college career up in enemy territory with Joe Paterno and losing out on the starting job to Todd Blackledge, Hostetler brought his talents to Morgantown to lead the Mountaineers during the 1982 - 1983 seasons.  Mountaineer fans found out in his first game as a Mountaineer how special he would be as he led WVU into a hostile Norman, Oklahoma, to take on Barry Switzer's number 9 ranked Sooners.  Hostetler proceeded to carve up the Sooner defense for 321 yards and four touchdowns en route to a 41-27 victory.  A week later, he led the Mountaineers over a second straight top 10 ranked team in the Maryland Terrapins.  After 2 years of playing in Morgantown, Hostetler then had a successful 14 year NFL career playing for the Giants, Raiders and Redskins.

His career with the Mountaineers yielded 4261 yards, 26 touchdowns with a completion percentage of 52%.  He also managed 150 rushing yards and 7 rushing touchdowns, including a memorable bootleg for a score to beat Pitt in 1983.