Mount(aineer) Rushmore: Which WVU Legends Belong On It?

Share All sharing options for: Mount(aineer) Rushmore: Which WVU Legends Belong On It? 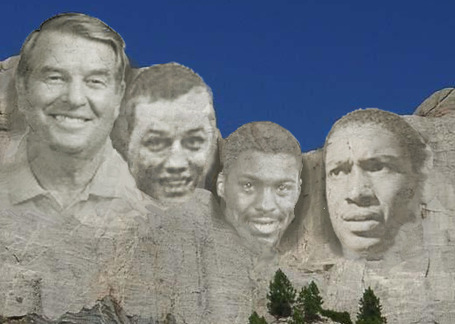 Last week I was listening to the Dan Patrick Show, as Patrick and the Danettes debated whether Derek Jeter's 3,000th hit was enough of an achievement to merit Jeter being included in a mythical Mount Rushmore of Yankee greats.  I think that when your team's pantheon of legends includes Babe Ruth, Lou Gehrig, Joe DiMaggio, and Mickey Mantle there isn't enough room for Jeter's face, but the hypothetical question got me thinking:  which faces would grace a Mountaineer Rushmore?

This is a two-sided question for us, since we have deserving legends in both basketball and football, but I chose to focus on football in my discussions with a couple of friends, one of whom, Coop, was nice enough to make the photoshop image above.

Nehlen was the foundational builder for the program we have now.  Harris made us a national brand with his exciting play.  Huff is arguably the best pro ever to emerge from the program. And Pat White may have been one of the best college players of all-time.  The issue of Rodriguez, though, kept coming up.  Because of the bitter ending of his tenure, it's hard to think his visage should be up there, but is it even debatable that Rodriguez elevated the program to a place of rarified air that it never breathed before?  So we decided he gets a plaque at the observation deck.

What are your thoughts?  And who along with Jerry West would grace the basketball Mount(aineer) Rushmore?