Beer At Mountaineer Field: The Best Of The Worst Comments

Share All sharing options for: Beer At Mountaineer Field: The Best Of The Worst Comments

The "verdict" is in and WVU fans, at least those over the age of 75, have voiced their displeasure with the idea of selling beer at Mountaineer Field.  This is based off the experience of their cousin the drunk, that time they heard someone say shit inside the stadium, and that other time they saw me having too much fun enjoying myself at a football game.

To give you a slightly better idea of the reaction to the proposed beer policy, I have searched for some of the best -- and by best, I mean worst -- comments provided to the Board of Governors.  I didn't have a chance to peruse all of the submitted bitching and moaning, so please include any favorites that I missed in the comments.

The "I'm old and I have no idea what I'm talking about" argument, which was echoed many times over, via Susan Beam:

Am I understanding correctly that you are considering selling beer and or wine at football games?  I do not think this is a good idea.  There are a lot of children and teenagers at games and I really think fake ID's would be a big problem.  I also think you would have more people smuggling alcohol into games.

Hmm, Susan, let's consider this a little more.  By selling beer in games, you think fake ID's are going to be a big problem.  Except, on the outside, fake ID's aren't a big problem because you don't need an ID at all.  You just walk to a tailgate, pretend you have a mustache (FYI: all people of legal drinking age have mustaches), and grab a beer.  In the stadium, the fake mustache routine won't work though.  Problem solved.

And one other point: if you're selling legal beer in the stadium, more people will smuggle alcohol into games?  Really?  Once you get back on your dial-up internet, you will have to explain that one to me.

The "I've clearly never been to a frat party at 2:00 am" argument, via Steve Holbert:

If you allow them to drink throughout the game, by the 4th quarter it will be like 2:00 am at a frat party.

In case you were wondering, Steve Holbert has clearly never been to a frat party at 2:00 am.  I can't repeat that enough.

The "alcohol is a drug, a dangerous gateway drug" argument, via David Dymm (Morgantown, WV):

Alcohol consumption in Morgantown among WVU students has always been a problem.  Adoption of this policy will send the wrong message to students that consuming alcohol, a drug, is acceptable.

So, if you're scoring at home, The Constitution of the United States states that the consumption of alcohol is acceptable.  David Dymm does not.  We, as Americans, are free to make our own choice as to which to follow, unless David Dymm has a problem with that area of constitutional law as well.

The "I agree with David Dymm" argument, via Mary Bartron (Morgantown, WV):

It is bad enough that tailgaters can serve alcoholic beverages in the WVU parking lots.

David and Mary should get together and fight for the repeal of the 21st Amendment.  Because that cat won't be hard to get back in the bag.

The "maybe those nerds should just stay at home, like they are already" argument, via Charles Woodmore:

And what of the students who dislike alcohol and being around anyone who's drunk?  These kids won't be able to fully enjoy events (provided they don't stop attending altogether).

Really though, I only included the above quote by Charles Woodmore to have the chance to also include this gem:

Charles apparently thinks that right now, the "Let's Go Mountaineers" chant is spoken softly in perfect King's English.  After beer, however, it will be heard as, "Thwaoiuhg kihff [pause for entire stadium vomit] Lhf/8feeqrhncjnkhf0ujmd!"

The "I have two degrees so I know what I'm talking about" angle, via Mike Snyder (Harman, WV):

I am an alum with two degrees from WVU and do not want beer sales at WVU games because I do not want to see a bunch of drunks while I am attending games, which is what will happen no matter the rationalizations otherwise.

Mike, I certainly hope those two degrees are in intercollegiate athletics, because otherwise, I might not believe you know what you're talking about.  Even if there is some debate on whether Mike is right or not, he confirms he's wrong with his next statement.

Enough money is being made off football games without throwing alcohol into the equation.

Essentially, every argument centers on the idea that kids are our future, I have been coming to games for 90+ years so I know what I'm talking about, I myself am quite old (so I know what I'm talking about and you, the athletics professional with years of experience and knowledge, do not.), and selling beer will result in the extinguishing of WVU as a worldly entity in a fireball that will be known only as "The Second Sun."

Oliver Luck doesn't think that to be true, and neither do I.  Selling beer at Mountaineer Field will act to control alcohol related incidents, not increase them.  Most fans simply hear "beer" and react blindly, which is exactly what I predicted would happen.  Of course, Luck and Co. have done more research into this than simply hearing "beer," firing up Compuserve, reading the user's manual on how to send an email, then three days later finally sending that email.

Of course, among all the hysteria, there's this comment (via Milton Richards, Athletic Director at California State Stanislaus):

I have been in College Athletics Administration for over twenty-seven years and have dealt with this issue on four different college campuses.  Although neither my wife nor I drink, consuming beer at sporting events is a national tradition.  From experience, I can tell you that when the venue controls beer sales incidents of alcohol related problems decrease.  Mr. Luck's plan to stop half-time re-admiitance to home contests and to establish a controlled beer sales plan is good policy that the BOG should enthusiastically support.

Imagine that, someone who has seen this proposed policy up close and personal agreeing with said policy.

A few comments were even handwritten. I have included this one, just for sheer amusement. No Beer!!! 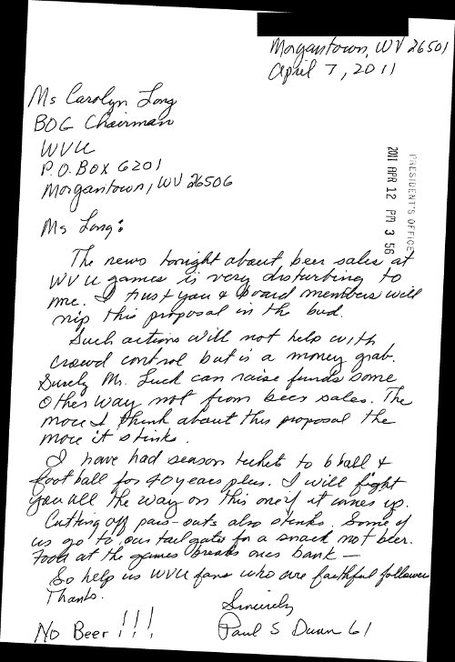