In the second edition of the Smoking Musket Hate Index, we have some initial updates.

First, it seems the Hate Index is a success. What better way to spend the off-season than going all Player Hater's Ball on entire teams, players, fans, and other notable offenders.

Second, we are debuting our Hate Index Hall of Hate, which is the highest honor (or lowest honor, I suppose) for any item on the Hate Index. Qualification is simple, yet extremely prestigious: appear on the Hate Index for 11 consecutive weeks. Why 11? Because it's one louder than 10. As we're voting off one member each week, appearing that many times won't be easy to do.

If something (or someone) does accomplish the feat, they'll be enshrined in the permanent Hall of Hate and not appear on the Index again. An example of the plaque: 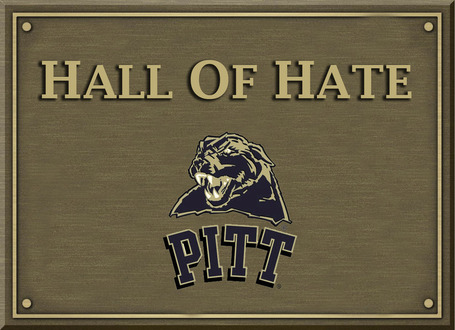 Classy, right? Everything Pitt is not. (awesome photoshop via ShadyMountaineer)

Lastly, remember to add your nominations for the vacated spot in the comments. The best submission(s) each week will be featured on the next version of the Hate Index. Also, in the poll, you're voting things "off the island," so pick the least deserving option.

OK, initial stuff out of the way -- on to the good stuff.

Volume II of the Hate Index and the relegation poll after the jump.

Last Week's Relegation: Ugly Kegler's Waitresses -- In what I consider an upset, the less than attractive counterparts to the tasty and delicious servers at Morgantown's main sports bar have dropped from the list. Maybe you guys don't find that odd outlier as annoying as I do. Maybe you're into fatties. I just don't know. What I do know is that they're off this week's list, but if you feel they've been aggrieved, feel free to nominate again. 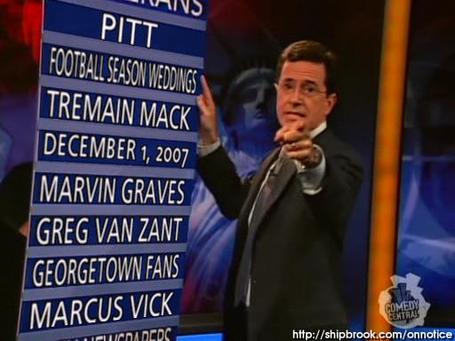 Pitt (2 consecutive weeks) -- Even when Pitt isn't playing, they still find a way to fuck up a situation. There I am, ready to sit down and watch an exciting national championship game, when instead I am subjected to an 8th grade JV game (with Jim Nantz calling it) for the next two and a half hours. Why? Because Nasir Robinson makes the bonehead play of the season in fouling Matt Howard and allowing Butler to advance all the way to score 41 points in the title game. Thanks for nothing yet again, Pitt.

Football Season Weddings (2) -- Seriously, check a calendar. Or don't get married. More than 50% of all marriages end in divorce, but I won't rest until that number is 100% for football season weddings.

Tremain Mack (2) -- In undergrad, we had a friend who contracted a less than desirable venereal disease, which was knowledge we were not supposed to have. To still make fun of him yet not alert him, we referred to it as his case of "Tremain Mack."

December 1, 2007 (2) -- On this day, Al-Qaeda in Iraq attacked Shiite villagers, killing at least 13 innocents. Coincidence? I think not.

Marvin Graves (2) -- Offer to anyone who reads this blog: if you see Marvin Graves and can get a picture of you bouncing a football off of his head, we will send you $10. Legal stuff: please don't outright assault the guy. $10 won't cover bail for a battery charge.

Georgetown Fans (2) -- "For the multitude of stuffy windbag assholes that they call ‘fans’. And for their stupid 'Saxa Hoya' cheer. We watched our guys beat up on Georgetown at the Phone Booth this past season, and it was a joy to watch the looks on the faces of these old farts while their team choked in the final minutes." (via Pepperoni Roll -- we love good descriptions for current nominations. The better the material, the more chance you have of making the Index.)

This Week's Addition: Marcus Vick (1) -- The gun toting, child molesting, pass throwing s.o.b that he was completely ruined my undefeated home football game attendance record. (via stillaneer -- Anyone having their undefeated record dashed is reason enough for me.)

Get your nominations in now. And if you need any inspiration...