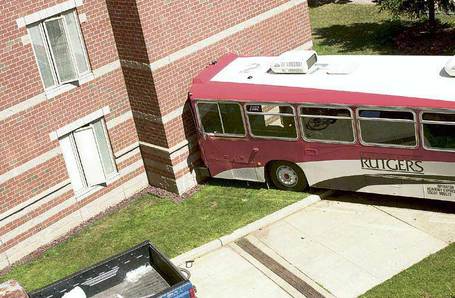 PISCATAWAY -- Upset that their football team has been unable to locate the figurative corner, let alone turn it, Rutgers University Board of Trustees today decided to file a lawsuit against Google, Inc., the makers of popular internet map site Google Maps.

Robert L. Stevenson, the chair of the Board of Trustees for The State University of New Jersey, released a statement detailing the university's fruitless search for the "corner" in question.

Rutgers University is a fine institution of higher learning with a word-class geography program.  It is impossible to think, without the misleading and defective maps provided by the defendant, that this university's football program would not have not only found the corner, but turned it with gusto.  Since that has not happened, we had no choice but to file suit in federal court.

Rumors of the corner in question have been spreading across campus since the school started playing Big East football in 1991, but without any firm evidence.

"My roommate said his brother was hanging out with Schiano and Schiano said he saw it once," said Anthony Madia, sophomore from South Orange, New Jersey.  Madia, unconvinced of his roommate's story, resumed eating his pepper sandwich.

A former student, Class of 2008's George Izzo, swears he saw the corner in question on December 2, 2006.  "Yeah, I saw it, late late that night," Izzo explained.  "But, I was drunk as hell and just kind of forgot about it.  Like, what was I going to do with a corner, turn it myself?  So I went to White Castle instead."  Izzo searched the next day to see if the corner remained, but it had vanished.

The most popular areas searched by players, students, and faculty for the mythical corner are Rutgers Stadium, Hegeman Hall dormitory, Mountaineer Field, and Club Karma in Seaside Heights, NJ, all to no avail.

Later in the day, Stevenson was asked for comment leaving New York's federal courthouse.  His tone was decidedly less formal.  "First, they tell us it's right off the turnpike," said Stevenson, "but that wasn't true."  "So, there we are, driving all over the Garden State in a bus, wasting all this gas, and what do we find?  Nothing.  We've been all over the Big East with absolutely no results.  We almost went to Miami once, too, but for some reason that trip was canceled.  It's really been a waste of time, and Google needs to pay."

"Plus, Dudley [Rivers, Vice Chair of Board of Trustees] farted, so now we're dealing with that noise, too."