We had an extremely close race this week, and much to my dismay, "Georgetown Fans" has been vanquished. Let us be perfectly clear: while Pitt and Virginia Tech may elicit much more hatred from Mountaineer fans, Georgetown fans are the worst type of fan. Elitist, condescending, and without a football program (sorry, this is 'Merica -- we play BCS football), they offer no redeeming quality. They consider themselves relevant in the Big East, yet the football schools only worry about Georgetown when they're ruining their NCAA Tournament bracket by losing early each year. I greatly despise Georgetown fans and hope that their absence from this list of hate is short and temporary.

So, Georgetown Fans gone, something else new. Remember, nominations go in the comments and votes are just like Survivor -- you're voting OFF the island. 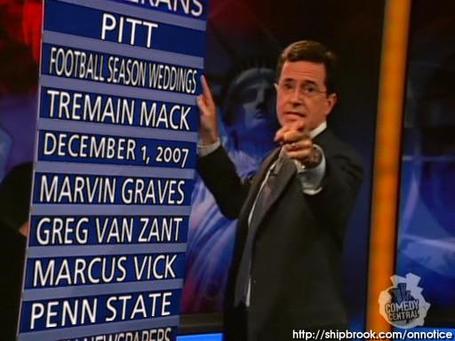 Pitt (3 consecutive weeks) -- Didn't think Pitt could succeed at much of anything in football? Well, sorry, you were wrong. If there was ever a competition on recruiting high-ranked players who end up being better an felonious assault than blocking, running, catching, or tackling, I think we all know who would be favored.

Football Season Weddings (3) -- Still holding strong. Now that WVU might serve beer inside Mountaineer Field, trying to meekly convince guests to come to your doomed nuptials with an "open bar and a TV" looks even more fruitless.

Tremain Mack (3) -- There's only so much information in the Googler for Mack and I've already run through it all. Next week, I just start making shit up.

December 1, 2007 (3) -- On this day in 1918, Lady Astor became the first female member of parliament. I blame both the day and Lady Astor for the presence of Hillary Clinton in my life.

Marvin Graves (3) -- Another week, another week without a video or photo of someone bouncing a football off Marvin Graves' head. Another week of muted disappointment. Now I know how my parents felt when I told them I was going to be a lawyer.

Greg Van Zant (3) -- Since Greg Van Zant is likely looking for a job this off-season, let me be the first to recommend Craigslist prostitute.

Marcus Vick (2) -- When he was kicked off the team at Virginia Tech, Vick said, "It's not a big deal. I'll just move on to the next level, baby." Since then, he's been accused of statutory rape, been involved in a high speed chase, tested positive for marijuana, and is not within 10 miles of an NFL roster. That's only considered the next level if you're Jesco White.

This Week's Addition: Penn State -- "We Hate Penn State….Not for kicking our butts for 30 years in a row, not because of Paterno, not for being in the middle of no where that takes forever to get to an away game, not for that annoying, constant Lion roar, not for having the ugliest uniforms in history (black shoes to boot).
We Hate Penn State for their arrogance, for leaving their families and forgetting where they belong. We Hate Penn State for maintaining that arrogance as they have muddled in the bottom to middle of an average conference. Get out you PaterNose glasses and hate Penn State with me!" (via Moun Ted, who is the leader in the clubhouse for best nomination.)