In the long line of significant events in Mountaineer history -- from the founding of the school in 1867, to the building of Mountaineer Field in 1980, all the way to 5th Year Senior's second try at senior year in 2004 -- none have quite reached the epic proportions of today's unveiling of the Smoking Musket Hate Index.

Built to stand the test of time, the Hate Index will be an evolving list of things in this world that WVU fans simply can't stand. While there will be stalwarts -- Pitt certainly comes to mind -- the index might one week include someone that has very recently drawn our ire. Gary McGhee, for instance. Or Brandon Knight. Or even Kellen Winslow (sorry, some scars heal slower than others).

Every week, we'll be back to give you a status update on the eight members of the index. We'll also allow you to vote one member off the list and take nominations in the comments for that vacated, coveted spot.

Everyone got it? Good. Hopefully, this will be something that unites us in mutual hate for seasons to come. And if not, you all can go fu...oh, sorry, got a little carried away with the hate. You guys are cool.

After the jump, the Inaugural Smoking Hate Index and relegation poll. Enjoy. 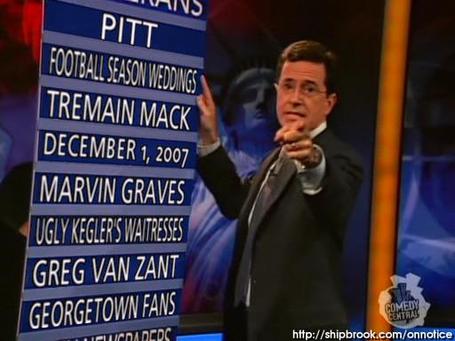 NOTE: For new nominations, give us your reason for including them in next week's Hate Index. The best description will be included in next week's post (along with a shout out to the writer).