Share All sharing options for: Prop Bets For The Bowl Game Junkie

Looking between the numbers and making sense of the empty space between them is a fools paradise. And the prop bet is the fuel that drives the machine. Based off this week's pick 'em games.
Meineke Car Care Bowl of Texas – Texas A&M v. Northwestern: Six and six bowling at it's finest on New Year's Eve! Sounds like an advertisement for Empire Lanes New Year's Eve bowling specials. But it's actually a football game. Straight up bet: Which former coach will be more vocal about how much better his team would do if he were still coach? Mike Sherman or Ron Zook? (You'll have to excuse the Zooker. He only remembers that he was coach of a Big 10 school in Illinois. The particulars were never really that important.)

Hyundai Sun Bowl – Georgia Tech v. Utah: Over/Under on the number of shots of hand-job hill the producers are willing to try. +/-3 It's possible if they get one good one, they'll rerun that rather than...

Kraft Fight Hunger Bowl – Illinois v. UCLA: Toss up! More people in the stands or on the field?

Chick-fil-A Bowl – Virginia v. Auburn: Dirty South meets Pinky South in what used to be called the Peach Bowl (26-6!). Number of casual fans that will be disappointed when they find out this isn't, in fact, a big game: +/-7. (No one reads Bleacher Report anymore.)

Taxslayer.com Gator Bowl – Ohio State v. Florida: Urban Meyer's loyalties will be tested. Whether he will admit it or not. Straight up, does Meyer wear the split jersey to show support for both teams?

Outback Bowl – Michigan State v. Georgia: Loveable Mark Richt verses Tough Love Dantonio. Even when Dantonio should be happy, he finds fault with something. Odds he expresses displeasure with the cadence of Erin Andrews questions during the halftime interview: 3-1.

Rose Bowl – Wisconsin v. Oregon: Odds Song Girl shows up to cheer for everything: even money. 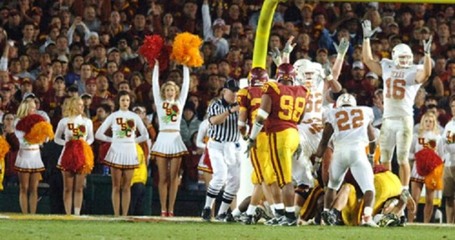 Tostitos Fiesta Bowl – Stanford v. Oklahoma State: Odds someone from a basketball school calls Oliver Luck an idiot again? Zero. (It better be, or I will dedicate my life to gifing their ass in every uncomfortable situation known to man. )

Allstate Sugar Bowl – Michigan v. Virginia Tech: The "Boise St. Doesn't Travel as Well as Us" bowl. Number of times the great season Boise State had this year is mentioned: +/- all night long. Should be, anyway.

Discover Orange Bowl – West Virginia v. Clemson: Chances Dana Holgorsen takes Dabo Swinney out on the town the night before the game: Man, I hope so! 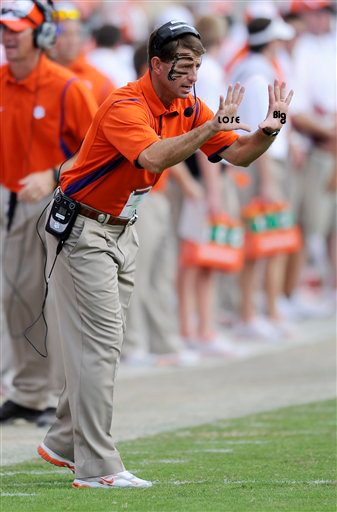