Geno Smith vs. Tajh Boyd: Who Would You Rather Have?

Share All sharing options for: Geno Smith vs. Tajh Boyd: Who Would You Rather Have?

There's been a lot of opinion tossed around (both here and other places) about how, perhaps, Geno Smith has regressed over the season and since last season. So I thought a comparison of actual statistics for the season and versus the would-have-been-Mountaineer was in order. Let's get to it... 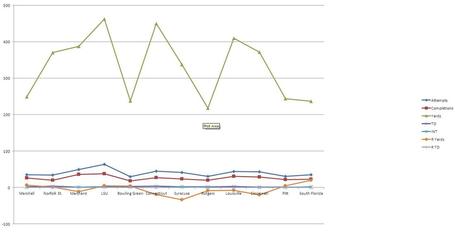 I know this isn't the easiest to see (CLICK HERE for a larger version), but, while you can see the yardage numbers fluctuate a good deal, there is a trend downward, but only slightly. Plus, some of his best statistical games were losses.

Let's compare the two signal callers now (for the purpose of this, we'll only look at this years numbers, since it's the only real full year of action for Boyd):

The numbers are fairly comparable, with Geno edging out Boyd by 5% in the completion percentage and Boyd getting the nod with 6 more TDs, but with an extra game.

But, probably the most glaring stat that I really didn't cover here is Geno's TD/INT numbers comparing 2010 to 2011. They are all but identical: 24/7 in 2010 and 25/7 in 2011. His yardage and attempts have gone way up but the arguably most important numbers are the same in the Holgorsen's new system as they were in Mullenball. Some will argue that Geno (in the words of Yoda) has to "unlearn what he has learned" under Mullen in order for him to flourish in Holgorsen's system. Thankfully he still has another off-season and season to progress. That said, if you could choose between these two quarterbacks to lead the Mountaineers in the Orange Bowl, based on game presence, leadership and statistics (disregard Boyd's commitment/de-commitment from WVU), who are you taking? My money is still on Geno.