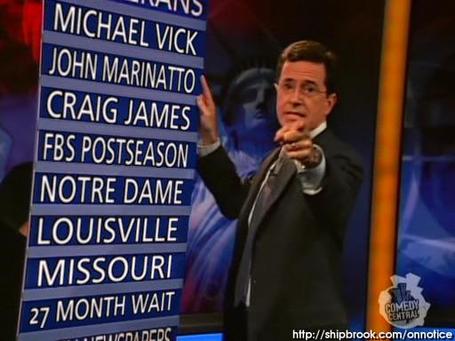 This week we needed to add two new entries to the board as Marcus Vick has landed a spot in the Hall of Hate and another has earned relegation due to apathy (as it should be for him and the school he openly pulls for).

Missouri - for the hedging, hem-hawing, and generally dragging their feet, slowing the realignment process down.

27 Month Wait - WVU wants out of the Big East and the Big East wants to keep them there for as long as possible, even if it means possibly taking the Big East's BCS bowl bid in a lame duck status.

Lowest vote total gets relegated/eliminated from the big board below. Lasting 11 weeks in a row gets the entry into the Hall of Hate. It's your votes and nominations that count. Get to voting and post your nominations in the comments section (if a previous nomination of yours didn't get picked up, try again). Creative and recommended nominations are more likely to be posted on the board.