Three & Out: A Book Review - Some Readers May Fry Bacon

Share All sharing options for: Three & Out: A Book Review - Some Readers May Fry Bacon

A friend of mine (a college football coach and a huge Michigan man) recommended that I read "Three and Out" by John Bacon.  I’m glad I did.  I’m a bigger Rich Rod fan than I was before.  If you hate Rodriguez and don’t want to believe any narrative about his departure other than what came from the mouths of Mike Garrison and Ed Pastilong, this book will only make you angrier.  A preconceived bias is likely true for Rodriguez apologists, too (the minority faction of WVU’s fan base).  We want to hear good stuff about Rich and this book further details the story to which we have always subscribed.

For objective fans looking for more detail about Rodriquez, this book will be entertaining.

John Bacon is a hard-core Michigan man, in addition to being a best-selling author and sports journalist.  He was given unprecedented access to Rodriguez and company during three seasons at Michigan.  He saw the mishaps, errors of judgment and personal foibles, and reports them all.  Love him or hate, this book will at the very least expose you to whom Rich Rod really is.  Bacon has no personal interest in making Rodriguez look good.  In fact, by making his alma mater look incompetent and hypocritical, Bacon has made enemies at Michigan and the Detroit Free Press (whom he made look unprofessional).

In the interest of full disclosure, I’m a Rich Rod guy.  Always have been.  I was a student at WVU when he was.  In 1985, every dude on my dorm floor was infatuated with the "hot blonde cheerleader" (who knew she'd be the future Mrs. Rodriguez).  And when Coach Rod left WVU, I sent him a note of thanks for all of his work in Morgantown.  To my surprise, I received a personal response from him the next week.  Granted, at that time he didn’t have a lot of nice notes coming into the office from WVU people, so I shouldn’t feel particularly honored.  I saved the letter anyway.

To be even more up front, my dislike of Ed Pastilong dates back to my years as a WVU student.  Back in the 1980’s he would strut about the athletic offices and Mountaineer Field as if he was someone important outside of that context.  He once made the mistake of barking like a junkyard dog at a group of us, and I’ve never forgotten what a tool I thought he was.  Having never left the comfort of WVU, he had no idea how to lead a football program beyond where it was.  He only had the wisdom he gained from Fred Schaus, his predecessor.  I always thought he was in over his head, and this book confirmed that for me by showing how threatened he was by Rodriguez’ growing influence in the state and prominence nationwide.

Pastilong could never get past the idea that people never chanted his name and that he was always going to make a fraction of what the WVU football coach did.  Only his ego would lead him to believe that he could appoint Elmer Fudd to replace Rodriguez and have football continue at an elite level.  If not for Oliver Luck, we’d still be enduring football mediocrity, if only because Pasti-ding-dong’s pride wouldn’t allow him to admit letting Rich Rod get away was a mistake.  Therefore, I was not surprised that neither "Ego Ed" nor former President Garrison (who had his own scandal with which to deal) was available for comment on this book.

Tidbits from the book worth noting:

If these "off the record" deals were struck, Rich Rod was foolish…twice.  If they were never made, he’s lying.  However, after reading Bacon’s endorsement at book’s end, seems unlikely:

"I don’t know of any sportswriter who ever got the kind of access to a major college football program that he gave to me, and I doubt any writer will ever be so lucky again.  He clearly had the most to lose, yet he never flinched from my many intrusions into his work and his life." - John Bacon 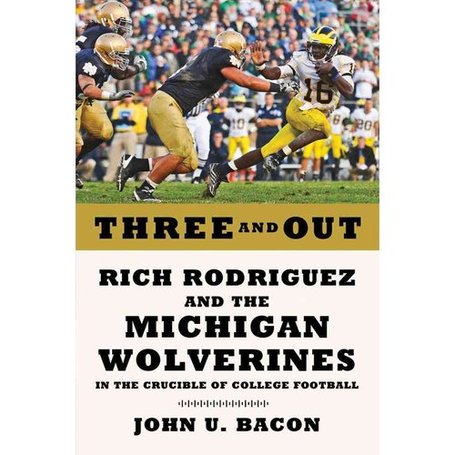