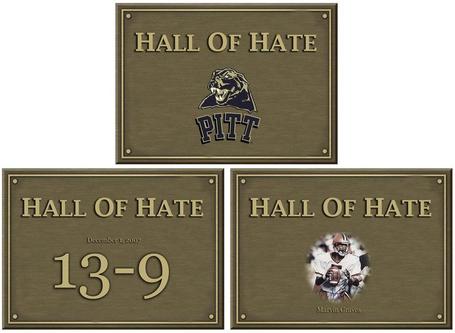 The Hall of Hate is for truly despicable things that are worth hating for the ages. Come on now, Marcus Vick? Therefore...your voices have been heard and he is no longer worthy of lifetime hate (even if he is a P.O.S.).

2011 Football Season - from TheUndergraduate:
Think about it. Every huuge headline this year has just been a tarnish on CFB’s reputation. Ohio State’s tattoo debacle, our Head Coach in Waiting implosion, every single bit of the re-alignment bullshit, and now the most (arguable i know) formerly respected, winningest, and tenured head coach in history is fired because he knew (at least a small part) about what his Defensive Coordinator did and did nothing? (I’ll spare the details because everyone knows them). I really feel there’s a lot to hate about this college football season as a whole and think it deserves a spot.

Noon Games - despite not really being under the control of the schools (an issue in and of itself), for travel and tailgating purposes alone, these are an abomination.

Lowest vote total gets relegated/eliminated from the big board below. Lasting 11 weeks in a row gets the entry into the Hall of Hate. It's your votes and nominations that count. Get to voting and post your nominations in the comments section (if a previous nomination of yours didn't get picked up, try again). Creative and recommended nominations are more likely to be posted on the board. Make your nominations known below!!