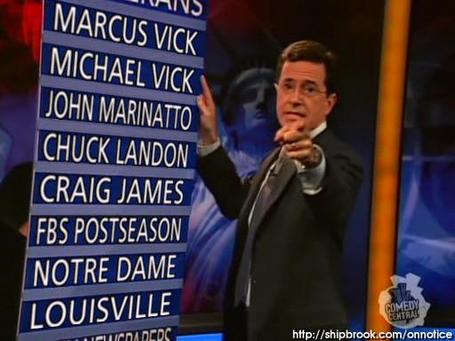 How appropriate is is that this week is Volume XII (whether we're moving or not)? Can Vick the younger last one more week and make it to the Hall of Hate?

This Week's Additions: Louisville - (there was no actual nominations to choose from last week, so we're invoking the clause for the staff to submit a nomination) whether they are behind this Big XII holdup or not, the perception is there and their whiny butts deserve to be hated for it.

Lowest vote total gets relegated/eliminated from the big board below. Lasting 11 weeks in a row gets the entry into the Hall of Hate. It's your votes and nominations that count. Get to voting and post your nominations in the comments section (if a previous nomination of yours didn't get picked up, try again).

We appreciate you explaining your votes, but we're more interested in new nominations. We already know why we hate the items on the list.