The LOL Board Doesn't Trust This Fruit

Share All sharing options for: The LOL Board Doesn't Trust This Fruit

Back in a simpler time, an LOL board could have been a news paper. You remember newspapers. The dominant media before the advent of cable TV and the interwebs. Back when West Virginia fans didn't actually hurl racial epithets at Ernie Davis. Ah, the good old days.

My distrust of Syracuse has nothing to do with how West Virginia was portrayed in The Express. Because as I stated in the link above, that's all on the creators of the movie not getting their facts straight. Nor is my distrust based on the Marvin Graves game. Sure he started that fight. But it's really the Big East hiring Stevie Wonder to officiate the game that caused the outcome to be what it was. No, it's the Orange's ability to win games they have no Earthly business winning that has me not trusting them.

Last year's game is a good place to start. Not to mention the 2008 game that was won on the legs of Noel Devine, but one we should have lost. The 1981 game sticks in my head because I just don't know how you beat Florida in the Peach Bowl, your only other two losses that year are to the #1 and #4 teams in the country, and you somehow lose to a rather unspectacular Syracuse team. I guess the dome was a loud and scary place to play back in those days. Then of course, there's that '92 game we will never forger. 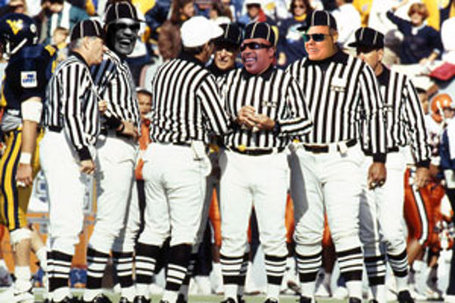 The rest of the world knows they got it wrong, but Ray Charles, Stevie Wonder, and Ronnie Milsap swear they didn't see anything wrong. So you see, you just can't trust this Orange and you can't trust anyone not wearing the Old Gold and Blue. I'm really just going off the top of my head here. So leave your reasons not to trust the Orange in the comments. But please don't bring up the ACC, because you know we'd be there in a heartbeat over the Big East if we could.

PS. If I had the time, I would've photoshopped some dollar bills sticking out of the refs pockets. But maybe that's an assignment best left to you.