The WVU @ LSU Timeline: How It's (Almost) Certain To Play Out

Share All sharing options for: The WVU @ LSU Timeline: How It's (Almost) Certain To Play Out

On Saturday night, the West Virginia Mountaineers will venture into Tiger Stadium -- aka Death Valley -- to play the LSU Tigers.  In a related note, I have been practicing the art of black magic, or voodoo for you novices, and have developed the ability to see into the future.  On a short break from trying to picture future lottery numbers, I decided to prognosticate just how this weekend's game will unfold.

7:00 AM (Central time): Tailgating begins.  Both fan bases have to pace themselves for 13 hours of imbibing.

11:00 AM: Games start on the east coast.  In other news, Louisiana has issued a state of emergency due to impending brown liquor shortage.

12:00 PM: First fight of the day.  Some fat cajun and some fat hillbilly get into it, and not one person can understand what they're yelling.  More unites us than divides us, guys.

8:00 PM: Bill Stewart triumphantly leads the Mountaineers on to the field.

8:05 PM: WVU wins toss and elects to defer.  Fan base collectively holds breath as Corey Smith kicks to all-galaxy Patrick Peterson.  Peterson has an opening, but looks over to sideline, catches glimpse of Bruce Irvin, and promptly falls down.

8:08 PM: Tigers convert third and three, but then the drive fizzles. Six and out doesn't sound as good as three and out, but we'll take it just the same.  Good start for the Mountaineers.

8:15 PM: Geno Smith completes pass to Patrick Peterson's half of the field.  Stadium doesn't collapse, world doesn't end, just a typical completion.  Apparently, he's not a demon spawn from the depths of hell.  Or, The Kraken.  Imagine that.

8:20 PM: WVU settles for a field goal, but it's positive news early on in Death Valley.  Weather, however, is on the horizon. 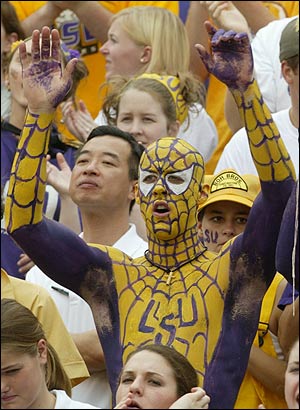 8:45 PM: First quarter ends.  WVU 3 LSU 3.  The game is probably just as exciting reading about it two days in advance as it is to watch live.  Plus, it's raining.

9:00 PM: WVU is the first to break big play, as Tavon Austin takes a reverse and scampers down the sideline for 1st and goal from the 4.  Three Ryan Clark carries later and it's 10-3 WVU.  For the loudest stadium in America, it's oddly silent.

9:05 PM: Spoke too soon.  Patrick Peterson returns the ensuing Mountaineer kickoff 96 yards for a Tiger touchdown. 10-10, and the stadium is just a weeeeee bit louder now.

9:30 PM: Minor body blows for the rest of the half, but nothing of too much note.  Games goes to halftime at 10 apiece.  WVU having more success moving the ball against LSU than expected, but the big play bites them in the ass again.  Peterson, aka The Kraken, has been released.  One more of those and its lights-out Mountaineers.

9:45 PM: Coach Stew buoys the troops at halftime by putting them all on his knee and telling them the story about the little Mountaineer that could.  Coach Miles murders four of his players with a machete.  Different strokes for different folks, I guess.

10:00 PM: LSU strikes quickly after halftime with another big play down the sideline, this time on a play-action pass.  LSU takes the lead, 17-10.

10:15 PM: WVU answers, but not as emphatically as they would like.  A promising drive stalls in LSU territory and Tyler Bitancurt is called back into action.  17-13, LSU with the advantage.

10:30 PM: The Mountaineer defense has started to stiffen up, with Bruce Irvin and Julian Miller providing the pressure.  Also, Robert Sands has jumped up with pain in his arm/shoulder at least three or four times yet still chases down ball carriers at an alarming rate.

10:45 PM: Under 5 minutes left.  LSU, faced with a big 3rd and 6, fails to convert.  A good punt pins WVU deep, as Jock Sanders does the smart thing and fair-catches the football.

11:00 PM: LSU isn't playing it safe, bringing the house on nearly every play.  A well-timed screen, however, breaks Noel throw the middle and puts WVU in Tiger territory.

11:05 PM: The scene: Mountaineers trailing the heavily favored LSU Tigers by four, deep into the 4th quarter.  92,000+ fans, the vast majority supporting the home team, want nothing more than to see WVU sulk out of the Tiger Stadium defeated and dejected.  Geno Smith has led the Mountaineers into Tiger territory, but an unsuccessful run and an incompletion have left the squad facing a tough 3rd and 9 from the LSU 32.  Geno takes the snap, faces a rush of pressure from both sides.  Just in the nick of time, Smith steps up in the pocket, only to see no receiver open.  Out of the corner of his right eye, he sees a flash of blue jersey streaking down the sideline.  It's #1.  And he's on a wheel route -- old reliable.  Geno lofts the ball into the air as #1 pulls away from his defender.  He catches the ball and crosses pass the endzone pylon at the same moment.  All is right with the world, until our old friend Patrick Peterson nails him into those stading along the sideline.  There's a mad scramble into the small crowd, as the ref tries to determine whether he held on to the ball.  Austin pops up to his feet, the ball proudly in his right hand held high above his helmet.  Touchdown is signaled.  The Mountaineers have taken the lead.  The play is of course reviewed, but the evidence speaks for itself: touchdown.  Bitancurt converts on the PAT.  Almost inexplicably, it's Mountaineers 20, LSU 17.

11:10 PM: Wisely, WVU squibs the kick.  With only seconds left, LSU is left only to heave the ball down field unsuccessfully.  Time expires, and the Mountaineers have escaped Tiger Stadium with a 20-17 victory.  For the next five minutes, the sound of 10,000 Mountaineer fans equally replaces the noise of 92,000.

11:15 PM: Every gold and blue wearing fan worth their salt sings the most inspiring acapella version of Country Roads ever delivered.  Everyone else has left.

11:30 PM: The Mountaineer calmly turns off the lights, shuts the door, and locks the gate.  For one night, Tiger Stadium is owned and operated by the West Virginia Mountaineers.