The unofficial website promoting Noel Devine's 2010 Heisman Campaign is now fully functional, up and running.  Our own DougityDog is one of the site developers.  The pic links to the site and the press release is after the jump. 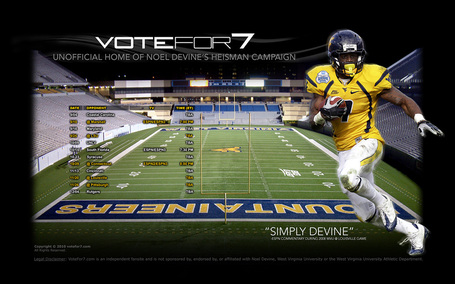 Devine, a preseason Doak Walker Award Candidate for the best back in the nation, rushed for more than 3,300 yards in his first three seasons, including 1,465 last year as he led the Mountaineers' to their sixth traditional New Year's Day bowl game in seven seasons. A unanimous first-team All-Big East selection by league coaches, Phil Steele and ESPN.com, Devine is among the nation's most prolific and explosive backs. The senior scored 13 touchdowns last season and was WVU's Gator Bowl MVP after amassing 168 yards on 16 carries (10.5 ypc) against Florida State.

Fans can interact and show support for Devine's historic Heisman run via VoteFor7.com's Twitter, Facebook and YouTube Channel pages at www.twitter.com/votefor7, www.facebook.com/votefor7, and www.youtube.com/votefor7. VoteFor7.com has also partnered with EERGear.com to design a line of campaign T-shirts that are available.