WAJR Reports Brandon Hogan Arrested For DUI; Is That It For Hogan's WVU Career?

Share All sharing options for: WAJR Reports Brandon Hogan Arrested For DUI; Is That It For Hogan's WVU Career? 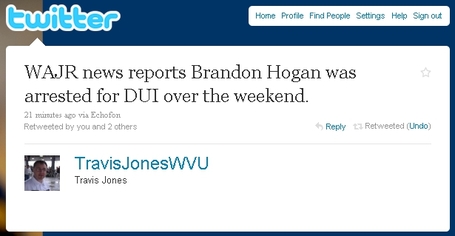 What started earlier today as a rumor has quickly progressed to fact, as radio news outlet WAJR (update: along with the Daily Mail) is reporting Brandon Hogan was arrested Saturday night for driving under the influence. Hogan was pulled over at 3:17 AM after driving the wrong direction on Spruce Street in downtown Morgantown.

This could mean the end of Hogan's career at West Virginia, as he has had both previous encounters with law enforcement and grade issues throughout his tenure in Touchdown City.  If that occurs, the Mountaineers will have lost an emerging star who has served as WVU's best pass coverage option.  It could also lead to drastically increased playing time for Brodrick Jenkins and Pat Miller.