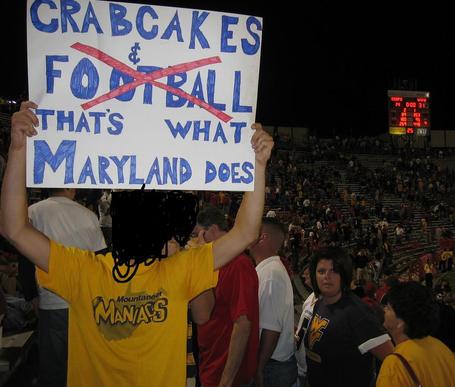 Anyways...it's Maryland week!  That excites me, simply because it's no longer Marshall week, which was just a huge pain in the ass.  I'm afraid if we were playing UNLV this weekend, the Marshall talk would linger for much longer.  But because it's Maryland, a border rival of the now mild variety, we can at least move on to other things.

As for what we're moving on to, I really have no idea.  This isn't the Maryland of years past.  There's no Scott McBrien, Shawn Merriman, D'Qwell Jackson, Vernon Jackson, Steve Suter, etc.  I honestly can't name one Maryland player.  Well, I couldn't yesterday, but today someone told me that Dave Megget's son plays for Maryland, so now I can now name exactly one Maryland player: "Dave Megget's Son."  I figure that's what it says on the back of his jersey, too.  Either way, I really don't know what to expect.  The Fridge is still there, but both his recruiting and fat jokes aimed at him have become tired and stale.  Outside of the above Sack Lodge joke, there's really not much to be had.

That's not even mentioning what to think of West Virginia, which right now is an enigma wrapped in a riddle wrapped in delicious buffalo jerky.  We know the offensive line -- specifically the right side -- was atrocious, which doesn't bode well for the season as a whole.  But then we witness the heroics of Geno Smith & Co. in the 4th quarter, and suddenly that glimmer of hope springs eternal.  Surely, the team can harness that kind of offensive firepower all game, right?  RIGHT?!?!?

And that's the problem, I have no idea.  My heart hopes yes, my head says not so fast, and my stomach says feed me (can you have brunch on a day that you also eat breakfast and lunch?).  Surely, there's no chance that the right side of the line can play worse.  And that's a rhetorical question, simply because I'm pretty sure it's true.  And if that is the case, the Mountaineers can spread the field and throw the ball around.  Marshall may have been trending more towards the prevent defense, but that tack sure was successful late Friday night.  Get the ball in space to Devine, Austin, Sanders, etc. -- yes, in that order -- and see what happens (same goes for Will Johnson and Stedman Bailey, who both came up with big receptions when it counted).

The only real direction I have on this game is the spread: a monstrous 13 points (up to 13.5 in some places).  That either shows a huge amount of respect for WVU or that Maryland is only playing defense this season with nine players.  Maybe it's a little of both.  It's clear that West Virginia is expected to win, but how that will happen is still way up in the air.  After Maryland's success at containing Navy's run attack, throwing to setup the run seems like the best option.  If our receivers can not 1) let the ball go through their hands and hit their facemask; and 2) not trip on their own feet, we could have a big, big day passing.  Even bigger than the 316 yards Geno Smith piled up on Friday.

Will that be good enough for a win?  Hopefully, yes.  But after the Marshall game, your guess is as good as mine.