Updating The Standings Of The Smoking Musket's Bracket Challenge

Share All sharing options for: Updating The Standings Of The Smoking Musket's Bracket Challenge

OK, my worries over my terrible bracket have officially been erased by the Final Four success of WVU.  Our own Country Roads currently leads, but his pick of Kansas as champion is dead-man walking.  He texted me last night that he would gladly give up the bracket title for a Mountaineer championship.  I didn't say it aloud, but if he had thought anything different, I would have slashed his tires.

If WVU does go on to win the title -- as well certainly hope -- TSM will have its first XX-chromosome dictated hump day.  I have absolutely no idea how that will look, but knowing Miss Hayes personally, I can only think we'll get suggestive pictures of scantily clad Cuisinarts. Considering I have a niche food processor fetish, let's just say I am excited.  I guess we'll just have to see. 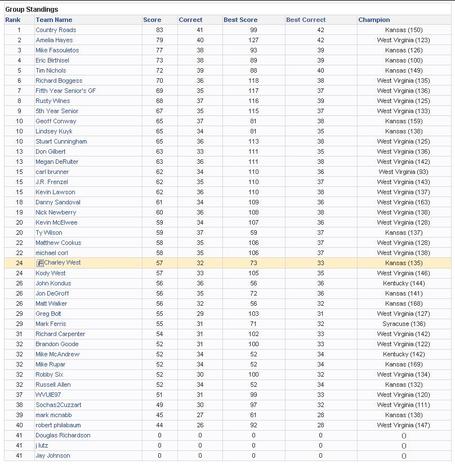