Share All sharing options for: The Shotgun/Throwdown: Monday (11/29/10) Edition

Let's recap the weekend:  WVU lays the smack down in the Backyard Brawl, Men's Basketball beats VMI and the Ladies win their tournament in the Virgin Islands.  All of this and yet the biggest story wasn't really a story at all.  It was just some ploy to increase internet traffic/subscriptions and stir people up.  Any respectable news outlet that quoted the story initially has since taken those down and in some cases, printed retractions.  Enough of that, Rutgers is up next and we still need some help from a surging USF team.  Basketball is steadily moving along. Huggs is upset and Sarah Miles suffered an injury, among the notable items.

If you have any tips, suggestions or requests for content that you think is worth sharing, you can send them to me by email or Twitter and don't forget to "LIKE" the Smoking Musket MAIN PAGE on Facebook (follow this link, then hit "LIKE").  If any of you didn't realize, clicking on "Like" on the individual articles just likes that particular article, but not our main page.  Many thanks to those who "Like" us already.  We're at 350 right now (far cry from the 19000+ for our old page, but baby steps people...baby steps).  Our next goal to get to 400.  C'mon people, spread the word!!  All your coverage is after the jump...

Bob Huggins: Postgame Press Conference - WVMetroNews.com
Huggins talks about why Dan Jennings and Truck Bryant didn't play in the game, Kevin Noreen's performance and how key Casey Mitchell has been for the Mountaineers this season.

A question: Would you go to Charlotte (again)? - 'Eers to the Ground

Football: Rutgers Game Set For Noon - MSNsportsNET.Com
Have I mentioned how much I hate Nooners?  Although with the weather forecast, it might be better...this week at least.

Kevin Noreen: VMI Postgame - WVMetroNews.com
Noreen talks about stepping in and performing for the Mountaineers when he is called upon.

Joe Mazzulla: VMI Postgame - WVMetroNews.com
Mazzulla talks about Kevin Noreen's performance and how things changed on the court when he got in foul trouble.

Jones wants to be own player - Times West Virginian

Casey Mitchell: VMI Postgame - WVMetroNews.com
Mitchell talks about the flow of the offense throughout the game and the way he performed.

Stewart got through to Mountaineers - Times West Virginian
Hertzel Column

WVU Defense is Flying to the Football - WVillustrated.com

What we learned in the Big East: Week 13 - ESPN

Non-News Item of the Week:

Stewart: "No Intention" To Retire - BGN

Boston College 16 - Syracuse 7: Who Knew 7-5 Would Feel So Disappointing - Troy Nunes Is An Absolute Magician

UConn 38, Cincinnati 17: Huskies somehow one win away from BCS bowl - The UConn Blog

Rutgers season in freefall after 40-13 loss - On the Banks

Pitt Vs. Penn: Another Blowout Win For Panthers, 82-58 - Cardiac Hill

Syracuse 80 - Georgia Tech 76: We Are Legend - Troy Nunes Is An Absolute Magician

We love Kelly Brook around these parts.

Today's Miss Throwdown is a native of Baltimore.  Click on the pic for a lovely gallery (at the bottom of the linked page) and video of Nicole Moser. 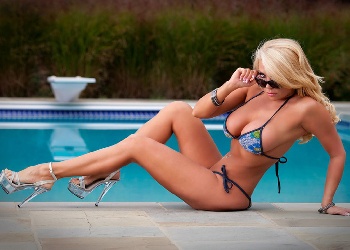