Behind The Musket: Eat Sh*t Pitt

Share All sharing options for: Behind The Musket: Eat Sh*t Pitt 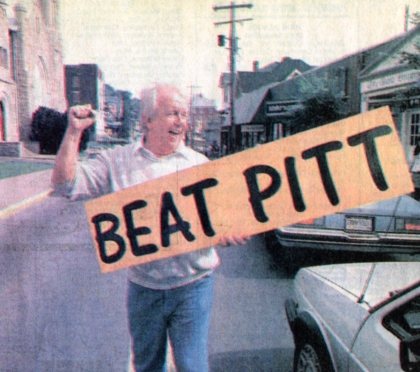 As Mountaineer fans, we all know and love Jack Fleming. The emotion and pride in his voice prepared us for battle every gameday. When television coverage of our Mountaineers was sparse, Jack's vivid depictions of the games could make us feel as if we had 50-yard line seats. He will always be known as the the "Voice of the Mountainers."

He is a legend and so are his stories. I know I will never forget this one, as told in the PPG:

One story that very few people know (and may or may not be a fictional tale) about Jack, is the way he started the first ever "Eat Shit Pitt" chant. So sit back, pour yourself a nice tall glass of your favorite bourbon and read a story about our second favorite cheer as Mountaineer fans.

The actual date of this incident is still under dispute, but let's put it around October 16, 1959. On that warm autumn day, a young Jack Fleming was walking the streets of Morgantown soaking in the enthusiasm for Saturday's upcoming game against the Pitt Panthers.

Every so often he would hear a faint "Let's GOOOOO MOUNTAINEERS" from frat row and a smile would cross his face. Pitt had dominated the series so far and Jack wanted nothing more than to beat Pitt. While he loved his Mountaineers, he knew Pitt had more talent and needed some type of surprise for them on Saturday.

Around this time he noticed a dirty looking man in an off "gold" shirt walking ahead of him. He knew it wasn't Mountaineer gold and suspected it was a Pitt fan that arrived a few days early for Saturday's game. Jack sped up his stride to catch up. When he got within a few feet from the man, the smell emanating from this man's person, almost made Jack fall over.

Being strong willed, Jack pressured on. He finally managed to get ahead of the smelly man while he was waiting on High Street to cross Willey Street he saw the nasty script writing that he feared. Jack thought about stopping, but knew the man was about to walk past frat row and wanted to see the carnage that was soon to ensue.

Jack continued on, but could not in good conscious let the Pitt fan get close to frat row. Before he began tredging up the hill on North High Street Jack stopped the fan and said, "You really don't want the trouble that is waiting for you if continue up this hill."

Being an idiot, the Pitt fan pushes Jack out of the way and continues up the hill. Jack shrugs his shoulders, smiles and follows the man to see what happens.

When the man reaches the first fraternity house someone shouts from a window, "Look outside brothers, it's a Pitt fan." Soon the front yard of the frat house is filled with brothers chanting, "Let's GOOOOO MOUNTAINEEEERSSS."

Not discouraged, the Pitt fan trudges on.

At the next frat house the brothers aren't waiting in the yard, they are coming out to the street to politley greet this Pitt fan. The brothers surround the man and immediately stagger back because of the smell. Then one of the brothers yells, "This dude smells." The Pitt fan responds, "That smell isn't me, it is the smell of this hole of a town."

When the man opens his mouth, the smell gets even worse. It is so bad, that Jack, standing many feet away, can smell the stench. The increased smell makes another brother say, "This twirp's breath smells like shit." "What did he eat?"

Jack raises an eyebrow and is hit with a moment of inspiration that will live forever in Mountaineer history. He raises his voice and started chanting "Eat Shit Pitt...Eat Shit Pitt...Eat Shit Pitt." At first some are taken aback by this new chant, soon everyone around is joining in. The sounds from the street pull the other fraternities out of their houses and they join together in the chant.

This cheer caught a talented Pitt team off guard and helped us to an upset 23-15 victory over Pitt. From that day on, any time WVU faces Pitt, you will always hear "Eat Shit Pitt" resounding through the hills and hollers of West Virginia!