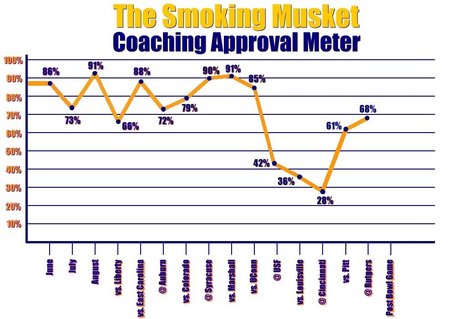 Better late than never, right? I'm pretty sure that's a real, honest phrase, so that's my cover for posting the Coaching Approval Meter on January 14th, even though the Gator Bowl was on New Year's Day.

Hopefully, the two week respite has given you time to cool down and think rationally about the whole situation. Or, if you're like me, still tripping on mescaline and balls deep in Filipino hookers. To each his own, I guess.

You know the drill: vote, then give us the lame reasoning behind your vote. Make sure you openly disregard anyone's logic and insert your own, stupidly formed ideas instead. Like we've been doing every week.