Share All sharing options for: The Shotgun/Throwdown: Wednesday Edition (9/2/09)

Welcome By-Godders to the humpday edition of the Shotgun/Throwdown, the best damn WVU Link Dump around (and proud of the Dump status, btw). Today, we're brought to you by Leinenkugel's Sunset Wheat, as requested by Eric I.

We're at Gamecon 3, and it's a Wednesday of a game week, so I'm hoping...nay PRAYING that 5YS comes through later today with an EPIC Hump Day post. I don't know about you, but I need a good Hump Day post after all the schadenfreude yesterday and that awful pic of the Crypt Keeper. It made me want to drink my face off. The tipline is open for requests, so on with the show:

What you may have missed:

Sowers elevated to starting lineup - The Charleston Gazette
The home grown boy is getting all kinds of press this season.

A history lesson for Mountaineers - PPG
And the PPG relates the Appy St./UM story......again.

WVU's offensive line weak this year - The Herald Dispatch
Somebody from Huntington dissing WVU.....NOOOOOOO!!! Disclaimer: This is actually an AP story, but it's just more fun thinking of it coming out of Huntington.

Stewart ‘leery’ of Liberty - The Register-Herald

Lights, Camera ... Liberty! - eersports.com
I'm a sucker for Gladiator quotes. Gets me going every time.

From Around the League (and beyond):

Bulls will wear Dorsey's No. 10 this year - ESPN
This is a nice tradition to start and honor a deceased teammate.

How inexperienced is Cincinnati's defense, really? - ESPN
Some interesting points made.

Limited Tickets Remain for Season Opener at Rutgers Stadium - scarletknights.com
I'm not sure if there are any left for our game, but this is an important league game.

Syracuse On Pace To Break The 40K Barrier - Troy Nunes Is An Absolute Magician
My, how the mystique of the Dome has fallen. 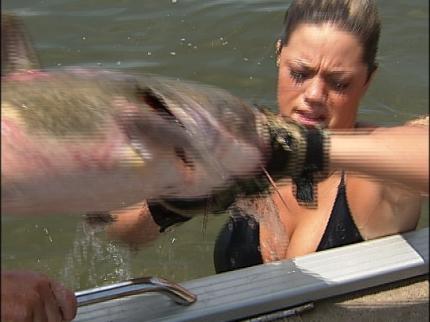 Cryin' Shame: Rodriguez, Another in Long Line of Sports Tear Shedders - The Legend of Cecilio Guante
My only question is how did Dick Vermeil not make this list?

I crossed out the Dis because this is the greatest emotional testament a player has EVER given about our beloved Mountaineers. This is when it's ok to shed tears. The video quality ain't the greatest, but.....Damn (sniffle, sniffle). I'll be ok...just give me a min.

Today's Miss Throwdown is Krystal Forscutt (that last name sounds like a circumcision to me). Sorry about that. I'll make it up to you all with two videos today instead of the usual one. Evidently she made her name on the Australian Big Brother show. Like you all care about that...click on the pic for a gallery: