Share All sharing options for: The Shotgun/Throwdown: Wednesday (9/16/09) Edition

Welcome, By-Godders (and yes, even welcome to you Bammers and Barners that have discovered our little internet nest) to the best link dump around. Today, we're sponsored by Grolsch, in honor of today's Miss Throwdown.

Wow, I go to bed early one night and miss all of the fun of that latest post. It's always fun when the Bammers and Barners find something new to fight over. I think I've found some things near the bottom of this post that we all can agree upon. It's my mission in life to bring people together. So, sit back, enjoy and don't forget to send in your tips.

What you may have missed:

Twitter / Coach Bill Stewart
"ESPN said that the East Carolina - WVU game was the most consumed college football game in terms of total hours viewed on ESPN360.com." Any chance that gets us on regular TV in the future? Here's hoping, but not counting on it.

Beilein's buyout illegal, auditors say - The Charleston Gazette
Well ain't that a kick in the nuts...At least the money's still coming and the University gets it.

Auburn having special woes, too - The Charleston Gazette
This could be interesting.

Injury news good, not so good - The Charleston Gazette
This could hurt...no pun intended.

WVU takes page from Southeastern Conference - The Register-Herald
Speed kills and everybody knows it.

Brown a study in dignity - Parkersburg News and Sentinel

J.T. Thomas using words, as well as his actions, to guide defense - wvillustrated.com

Wife Says Finau Still WVU-Bound - eersports.com
Legitimate explanation given in the 1st paragraph....but this is getting worse than Bigfoot, Loch Ness Monster and the Yeti combined.

Oklahoma State tumbles, Michigan rises in College Power Rankings - Andy Staples - SI.com
This ass clown still has ND ranked. We are in his "next five" now though. Where's Auburn?

Around the League (and beyond):

UConn looks to bounce back at Baylor - Big East - ESPN

Dion Lewis Having An Impact - Pitt Blather
Against Buffalo and Youngstown...call me after he's played a real team.

Syracuse Fans Just Kidding About All That "Support" Stuff - Troy Nunes Is An Absolute Magician
Remember when "The Dome" was intimidating? Yeah, me neither.

OSU's Riley: UC might be best team in Ohio - The Cincinnati Enquirer
Of course he's gonna say that.

Auburn Runs Out to Hot Star - The Quad Blog - NYTimes.com
Auburn has been surprising with its strong early performance.

Forde Yard Dash - ESPN
We check in at #25 of Mr. Forde's weekly rundown.

Picture of the Day:

I think even the Bammers and Barners can agree with us to hate on this one. We get these Leauxsers next year. Courtesy of EDSBS. 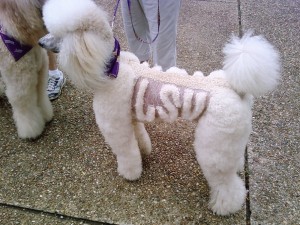 Bonus Gallery of the Day:

Sadly, this lady from New Hampshire didn't have what it takes to make the cut of Miss Throwdown. Which means I couldn't find a video of her awesomeness. Meet our 1st runnerup today, Valerie Cormier.

Today's Miss Throwdown is half Spanish and half Dutch. And as some say, if you ain't Dutch, you ain't much. Meet Lorena Van Heerde.