WVU vs. ECU, Auburn Fans, And Other Things That Made Me Want To Throw My Shoe

Share All sharing options for: WVU vs. ECU, Auburn Fans, And Other Things That Made Me Want To Throw My Shoe

I can do one of two things with this post: (1) I could state the obvious and say that special teams pissed me off, or (2) I could give you an original take about my gameday experience.  Lucky for you, I'm going to do a little bit of both.

Hold on tight, this is going to be a bumpy ride...

Did anyone else notice how lame the ECU fans were this year?  They were not talking trash or even making any noise.  I expected to hear a few "ARRRGGGHHS" or something.  My tailgate offered multiple groups of ECU fans beers and only one person wanted a beer.  I guess I should've been offering free STDs.  ECU students love those things.

Jock Sanders, why do you wave everyone off and then try to grab the ball yourself in a crowd of ECU defenders? To me, it is like the chubber at Elements/Envy that keeps telling the guy from New Jersey that she won't go home with him.  Then at the end of the night when there are no other guys left, they go home with the Jersey trash and wake up with crabs.  Just stay away next time.

I seriously think everyone should be given a gun and six rubber bullets a month.  That way when someone tries to steal beer from your tailgate, BAM! rubber bullet to the chest.

Overall, I was actually proud of the student section for a change.  It stayed relatively full the entire game.

#5 This is your typical Aubarn fan. 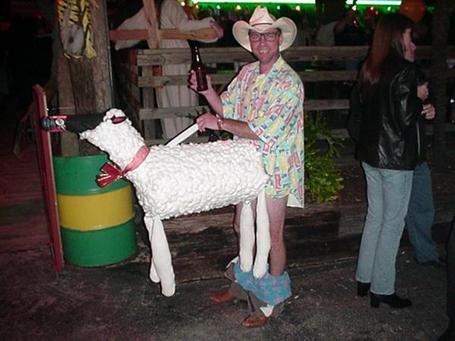