Roll Tide, is the battle cry we will hear all weekend as we travel deep into SEC country. Wait, is that right? Eh, who cares, Auburn and Alabama love each other. I don't even think the "Iron Bowl" is considered a rivalry. Besides, any bowl named after a wife's main job around the house just seems lame to me. They are still ass backwards in the south.

They can yell "War Damn Eagle" or "Roll Tide" all they want because they won't be able to drown out the singing of Country Roads as Mountaineer fans exit the stadium after a WVU victory.

For the legions of Mountaineer fans traveling to Auburn and those staying at home, here is some information about Auburn we should all know.

War Eagle: Auburn's mascot is a Tiger but they like saying "War Damn Eagle." Why? Here is the crazy stroy behind that "battle cry."

Tiger Walk: As most things in the SEC, Auburn takes credit for creating something that started eslewhere.

Aubie: Is a fury and Auburn's mascot. 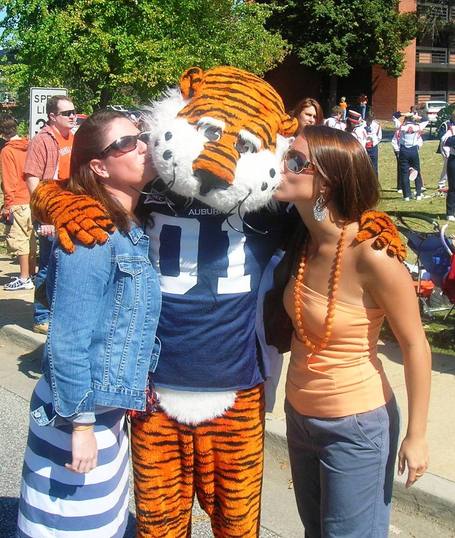 If any 'Barners want to share some other traditions feel free to do so now because you won't want to show your face next week after a Mountaineer beat down.

[All info courtsey of Wikipedia]