A Swan Song For Deon Long

Share All sharing options for: A Swan Song For Deon Long

Word is trickling out today that Deon Long has officially failed to achieve his needed test score and will enroll at Hargrave Military Academy for a prep year.

This isn't all bad news, though.  Sure, we miss out on Long this season, but he will have a year of playing football (without losing a year of eligibility) and have a full year to get his needed score.  If he gets that score within the next six months, though, he can enroll in January as a greyshirt, go through spring practice, and compete for the team as a true freshman in the fall of 2010.  Hargrave also has a very good reputation of keeping signees with their original schools.

In sum, some expected bad news with a definite light at the end of the tunnel.  Though, I have to admit, it is depressing logging into CBSSports and seeing the graphic below, knowing he won't be on campus this fall. 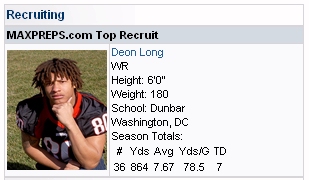