Share All sharing options for: Ed Pastilong Better Stick To His Guns 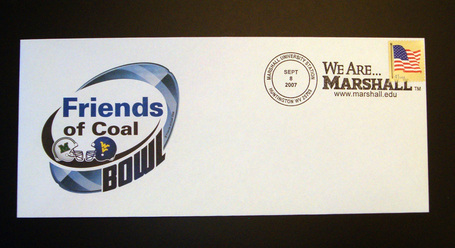 Think this game isn't just a little too important to Marshall?

If Pastilong's legacy is going to stay intact, and right now it's being held together with two hands and duct tape, he better well not let Gov. Manchin force West Virginia into a 1-for-1 with Marshall.  In my opinion, and I can't believe I'm saying this, I think Pastilong gets this one right.  Let's take a look at the factors.

First, Gov. Manchin has to run for office again.  This time, it's not a breeze into the Governor's Mansion, either; it's an extremely coveted Senate seat.  While his decision to force WVU into this current series was extremely unpopular with Mountaineer fans, it didn't cost him enough votes in his campaign simply because he was running against a nobody.  This time?  He'll have to face someone like Shelley Moore Capito.  While he'll certainly be favored, he can't afford to give up any votes (and this is a real thing; 5th Year Senior didn't vote for him because of the Marshall series).

He might publicly contend that the Marshall series is a "win-win," but when it comes down to brass tacks, he can't be as assertive this time around.  It will just be too costly for him.

Second, Pastilong's legacy.  I think he's genuinely pissed about how the last series was forced upon him.  I think, in the twilight of his career, he wants to make sure that he's not pushed around like that.  It just looks bad.  He's marked his territory on this 2-for-1 demand very publicly.  Just see Mitch Vingle's article in this morning's Gazette.

"We've had discussions with Marshall," said the Mountaineer AD. "Our position is we want 2-for-1. If they'd agree, we'd go ahead and sign.''

That's exactly what he should be saying, and I applaud him for it.

Lastly, the ECU argument is ridiculous.  That series brings a lot to the table that the Marshall series simply does not.  It's been a great regional matchup, allowing alumni in North Carolina (Charlotte and Raleigh are huge alumni chapters) to attend a road game each year.  And if you've been to one of those games, you know how well attended they are by West Virginia fans.  And the experience is great; simply put, ECU is a fun away game.  It's a good atmosphere before, during (save for last year), and after the game.  Plus, we've played them for years and years, making it much easier to continue a series that works, rather than start a series that doesn't.

What is done in Huntington can just as easily be done in Morgantown.  It doesn't bring a large ESPN audience, it's not regionally important, and Marshall also stinks at football.  The ECU game is the opposite of all those things.

So, Eddie, I commend you on your firm stance.  We might not agree on much, but this is certainly something I can get behind you on -- and I definitely mean that in the most confused sexual orientation way possible.