As we're just over an hour away from kicking off what is assuredly the "greatest two weekdays of the year," The Smoking Musket has decided to completely throw productivity down the drain and live blog most, if not all, of the first round of the NCAA Tournament.

Check back as we will continually update these posts throughout Thursday and Friday.

Here are the games we'll be watching first:

11:25 (5YS):  I am looking forward to LSU v. Butler the most.  It will be a good barometer on just how terrible the SEC is this season.

Lots more after the jump.

1:05 (CW): Glad that the Memphis game is staying close.  Having watched the #2 Duke vs. #15 Belmont game live last season, there isn't anything quite like 3/4 of a stadium cheering for a tiny underdog. 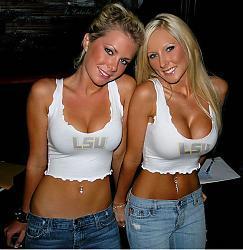 1:20 (CW): C-S Northridge only down two towards the end of the first half.  I have no logical basis for hating Memphis, but I just do.  So, go Matadors!

1:30 (CW): All three games are at halftime.  You know what means: crystal meth time!

1:40 (CW): A barely double digit scorer has 12 for Texas A&M in the first half.  Look for them to come back down to earth in the second half.

1:43 (CW): Now we're getting word that Jim Calhoun will not coach UConn in the first round due to illness.   This won't be a big deal today, but the second round game against either BYU or Texas A&M could get more interesting.

2:05 (CW): BYU is really starting to piss me off.  Like I really needed yet another reason to dislike Mormons.

2:21 (CW): You can just feel this one slipping away for Northridge.  Just like Belmont last year, they just don't have the firepower to compete without getting all the breaks.  Let's hope I'm wrong.

2:26 (5YS): I don't know if anyone else just saw the new commercial for Axe Dry but I just threw up in a my mouth a little.  That dude was spraying sweat everywhere.  Nasty

Also, today and tomorrow should be national holidays.  Just get rid of Columbus Day - He did not discover shit, he just got lost - and National Talk Like a Pirate Day.  What? Y'all don't celbrate that day?

2:50 (5YS):  Is it bad that I am not even trying to hide the fact that I'm watching the games on my computer?  BTW, the results of the early games have really surprised me, especially LSU over Butler.  That really shocks me.  Teams with awkward looking white dudes always win early in the tournament. (Hence, the Beilein era -- ed.)

3:00 (5YS):  First item thrown of the day, a pen.  Reason: I realized you cannot switch between games during commercial breaks.

3:10 (CW): Greivis Vasquez might be my favorite non-Mountaineer.  He is an absolute punk, but he's completely unapologetic for it.  I respect that.

3:15 (5YS):  Those goofy looking Northern Iowa guys need to start hitting some shots.  They may get run out of the gym if they don't stop sucking.  It is not good that they are letting Purdue push the tempo.

It must be hard to win while wearing purple.

3:41 (5YS): I hope these games get a little more exciting.  Cal v. Maryland has some potential but right now these games suck.  I shouldn't complain.  At least I'm watching basketball instead of working.

3:45 (CW): Sure, they suck, but they're going just as expected.  It's not like we should expect a bunch of mismatches to keep us entertained.  The good games really start this evening.

4:05 (5YS):  Northern Iowa keeps trying to mount a comeback but they continue to shoot themselves in the foot.  I guess you have to give Purdue credit too they are playing really tough D.

4:13 (5YS):  That Eglseder guy is going to be REALLY fat in a couple years.  I see him being the next Bryant "Big Country" Reeves. 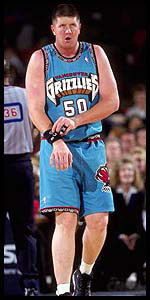 4:52 (CW): Good lord Vasquez is a punk.  He shoots an airball, gets a steal, then quiets the crowd with his finger.  And I LOVE it!  Who wants to order a "Totally gay for Vasquez" t-shirt with me?

5:05 (5YS):  It looks like I finally hit an upset with Maryland crusing against Cal.  Vazquez is almost as big of a punk as Devendick.  At least 'Quez (as I like to call him) doesn't have any neck tattoos.

We now have that one weird late afternoon/early evening game...