Share All sharing options for: Meet The Dayton Flyers 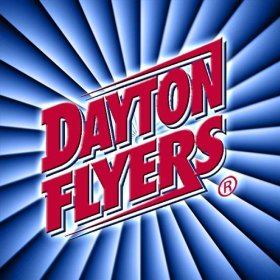 Please, try to refrain from being hypnotized by the Dayton logo.

West Virginia's first round opponent, Dayton, besides having a ridiculous looking mascot, is an at-large selection from the Atlantic 10 (a league we once knew pretty well).

Dayton, while having a strong resume overall, has limped to the finish, losing in A-10 torney to perennial Mountaineer victim Duquesne.  In fact, Dayton lost five of its last ten, though all were on the road (or neutral site in the tournament).  The home/away split is an important one for Dayton.  This season, they went undefeated at home, yet faired considerably worse on the road, managing only a 3-6 record.  At neutral site locations, they went 2-1, with impressive wins over Auburn and Marquette early in the season, but dropping the aforementioned tournament game to the Dukes.  They also own wins over tournament teams Xavier (home) and Akron (road).  And remember, they beat Pitt last year.

Their limp home is evident in the spread on the game, as Dayton meets the Mountaineers as 8.5 point underdogs.  That is certainly one of the larger spreads for a first round game not involving a #1 or #2 seed.

Much more after the break...


Just from a look at the starting lineups, it's clear that Dayton will rely more heavily on its bench scoring to keep up with the Mountaineers.  That usually comes in the form of 6'2" junior guard Mickey Perry, who has scored in double figures in three of his last six, as well as 6'5" swingman Chris Johnson.   Another potential scorer, Rob Lowery, is out for the season after sustaining an ACL injury -- he was averaging 7.5 points per game on the season.

This is a smaller Dayton team that lacks a legitimate inside scorer.  And if you've watched WVU at all this season, that's music to your ears.  West Virginia is at its best when it can dominate the boards and create numerous second-chance opportunities.  While Chris Wright and Charles Little have some size, they certainly don't compare with the talent the Mountaineers have faced against the front lines of the Big East.

Making things even worse for Dayton is a scheduling snafu that has the town up in arms. While the Flyers are sure to have its fair share of fans in the stands in Minneapolis, they might have a few less watching back at home.  You see, the NCAA has decided to schedule the Dayton sub-regional games (including our BFF Pitt) for almost the identical time as the Flyers game against WVU.  Steve Waddell, meanwhile, is pissed:

"I am angry," said Steve Waddell, a Bellbrook resident who called the NCAA to complain about the scheduling conflict.  "I can't believe that is not part of the standard operating procedures. I think it had to be a terrible oversight or mistake on their part."

UD Arena hosts four games Friday, two in the afternoon and two at night. Each session requires a ticket with a face value of $66.

Waddell, a UD season-ticket holder for more than two decades, said he has tickets for both sessions. He plans to attend the first game — at noon — then skip the Pitt game and go home and watch UD play. Then he'll return for the evening games.

"The Arena is going to be half full at best," Waddell said.

Even with the lack of schedule bliss, this is not a Dayton team that will be intimidated by WVU's status in the Big East.

UD (26-7) will face West Virginia (23-11) in Minneapolis on Friday, March 20. The Mountaineers, coached by Bob Huggins, finished 10-8 in the Big East, which is widely considered the top conference in the nation

But don't expect the Flyers to be cowed by the challenge. They're 2-0 against BCS teams this year, beating Marquette and Auburn on a neutral floor. And they went 2-1 last season, whipping Louisville on the road and Pittsburgh at home before losing at Ohio State in the NIT quarterfinals.

"We're just showing guys we're not a soft league," UD junior guard Marcus Johnson said of the Atlantic 10, which was ranked eighth nationally in the RPI standings this year. "We've got great teams in this league, and anything can happen."