Share All sharing options for: Rollercoasters Make Me Nauseous

Here's a quick snynopsis of this season:

Basically, there has been very little rhyme or reason to anything that's happened this season -- and that includes our gameplan. We'll take one step forward and two steps back, and then immediately take three steps forward and two back. But, at the end of the day, we seem to end up in the same place. Which is: not knowing what the hell is going on.

We have had a very good recruiting class that, as of two days ago, was being held together with both hands and duct tape. Our top verbals were taking trips to Sea World if only because it was paid by another school. Then, Eugene Smith commits and all seems right with the world again. Oh, except for that fact that we have 3 losses and no cohesive system on offense. But we have one of the best WR classes in the country. Unfortunately, no one knows if we'll know how to use them next year. No one knows anything, especially me.

So, since so much is up in the air, I think there's only one thing to do: call a national championship in 2009. Who's with me? 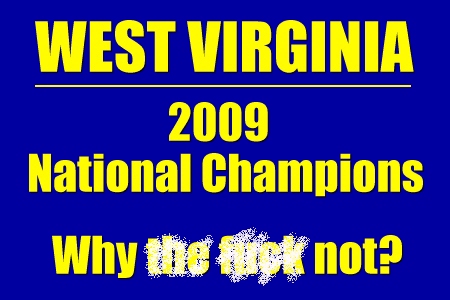