Share All sharing options for: Rodriguez First Hispanic Coach To Be Fired 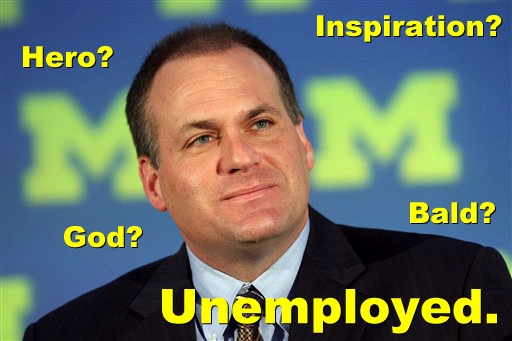 ANN ARBOR -- In a historic move for a country with a once-checkered racial past, Illinois Senator Barack Obama, an African-American, was last night elected President of the United States. Today, in that same vein, the University of Michigan has made a similar bold move: making Rich Rodriguez the first Hispanic ex-coach in Wolverine history.

Bill Martin, Michigan's athletic director, felt his school was ready for such a move. "If the election of Barack Obama has taught us anything, it's that this great country is becoming a much more progressive place," Martin said. "The University of Michigan is no different. We felt comfortable taking a leap of faith in making Rich Rodriguez the first Hispanic former coach in UM history. It's a proud day."

Rodriguez, who was hired just last December, has compiled a 2-7 record as Michigan's head coach. The Wolverines rank 109th nationally in total offense and will not qualify for a bowl game for the first time since 1967. It was these factors that led Martin to historically relieve Rodriguez of his duties.

By doing such, Michigan has still handsomely rewarded Rodriguez. Though he is technically being fired, this modern-day Rosa Parks will be paid a buyout amount of $4 million, making him the highest paid Hispanic ex-head coach in the United States.

"Years from now, young Hispanic boys across this great country will dream of being fired just like Rich Rodriguez," Martin explained, fighting back tears of joy. "It's truly the American dream!"