Share All sharing options for: Program in Meltdown: Syracuse

Yeah, that about sums it up. Douche.

Note: This is part two of a four part series. Part one (Louisville) can be found here. Parts three (Pitt) and four (Rutgers) will run tomorrow.

Let's be honest here, this program isn't in meltdown. It's long, long gone. The next head coach has a total rebuilding job on his hands.

Unfortunately for that poor soul, once-and-former coach Greg Robinson has salted the earth and buried a ton of land mines. Let's just say it's going to be a tough job.

But how in the world did we get here?

In the decade that preceded Greg Robinson, the Orangemen (they hadn't been neutered yet) played in seven bowl games and won 73 games. In the first three years of Robinson's tenure, the Orange (post-neutering) have won a combined seven games. So, on closer examination, it seems Greg Robinson fucking sucks hardcore. And you'd be right.

Sure, the last three years of the Paul Pasqualoni era only produced sixteen wins. So what? Last time I checked, sixteen was more than double seven. Seven wins in three years just sucks. It sucks hard. There are no excuses. Robinson has quickly turned Syracuse into a national laughingstock. No longer do the words "Syracuse football" mean anything to recruits.

Greg Robinson has torn down everything that Syracuse once stood for. And the entire time, his Athletic Director (DOCTOR Darryl Gross) has stood either behind him in support or above him with meddlesome puppet strings. 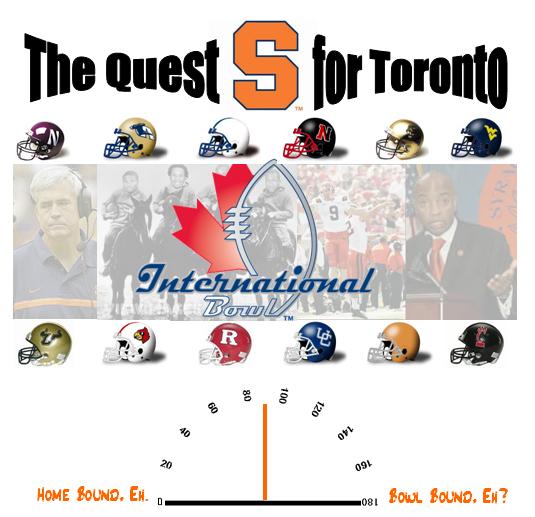 It's really not any fun to make fun of Syracuse anymore. Their fans have completely given up. The blogs are busy giving up, and it's only the first game. Bringing back Greg Robinson only delayed the reckoning another year. Robinson will be fired this year. Until then, Syracuse fans -- fans that lived just recently through the successes of Marvin Harrison, Donovan McNabb, and Dwight Freeney -- must futily hope for an International Bowl appearance. It won't happen. And I almost feel bed.

[Thanks to TNIAAM, who I do feel sorry for]