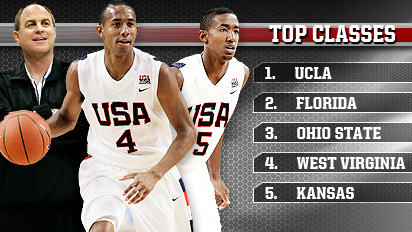 "The 25314," I ask myself, "you sexy, good looking zip code, I know Devin Ebanks gives West Virginia a solid recruiting class, but how good is it?"

Well, recruiting rankings are out for the classes of 2008, and West Virginia - the place to which John Beilein swore you could not recruit - is ranked fourth in the country by ESPN.

Not to be outdone, Scout.com's new team rankings came out today and West Virginia is ranked 10th, right in front of Arizona, Duke, and Kansas.

When Huggins finally arrived in Morgantown (15 years too late), there were questions if he really could recruit his typical players to Morgantown or could win with Beilein's guys. I thought it might take a couple years to build a successful team and start landing impressive recruits.

I was wrong. Man, was I wrong. Wrong-er than the Jersey kid who rolls out of bed on a Friday night and thinks, you know what would look really good with this black wife beater, candy-striped or black shirt, blowback haircut, bachne, and guyliner? JAEGERBOMBS!!!

One point away from the Elite Eight, Top 10 recruiting class, and a lifetime contract. Fairly decent year one.

Not to mention a timeless and epic rant after the first Pitt game, in which Joe Alexander scored 5 points and grabbed 4 rebounds, where Huggins, without naming Joe, said, "I don't know why I keep calling plays for him. He doesn't want the ball when the game is on the line, and he won't get it anymore. I'll never call another play for him. As far as I'm concerned he's a screener from now on."

Huggins first year in West Virginia has been so incredible good, I think a new letter needs to be invented to grade it. Maybe ZJ.