Anytime you have a new staff, you'll inevitably have a change in recruiting tack and area. Of course, when you promote from within -- like WVU did -- the changes are usually minimized. With that said, there has already been a definite migration of where WVU is looking for football talent.

During the Rodriguez era, we saw a few different concentrations as far as recruiting strongholds went.

In the 2002 recruiting class, we dove head first into the South, with a curious, Todd Graham-lead emphasis on Texas. By 2004, we were still in the South, but had moved our state of curious emphasis to Louisiana. 2006 saw us completely abandon the South, with the exception -- as always -- of Florida. Basically, between 2001 and 2006, the only constants were western Pennsylvania and Florida.

But in 2007, that began to change. Or at least it changed for one year, since this would be Rodriguez's last recruiting class.

Due to the magic of Google Maps, we can see exactly how our 2007 class was distributed: 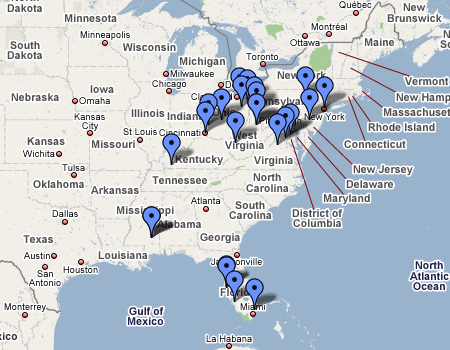 While it's obvious that we concentrated on areas closer to West Virginia, one particular fact stands out: 6 prospects from the state of Ohio. Under Rodriguez, we had always recruited Ohio, but usually just a prospect or two. Unfortunately, with Ohio, there's one overriding factor governing their instate talent: if given the chance, they choose Ohio State.

Essentially, we were picking up OSU's scraps by recruiting Ohio. Very, very rarely will a prospect choose WVU over OSU. They are the clearly defined state program and will win just about every recruiting battle instate, regardless of the opponent school. While OSU will generally recruit better than WVU, settling for their scraps is not exactly the picture of a top 10 program.

Which brings us to the current class: 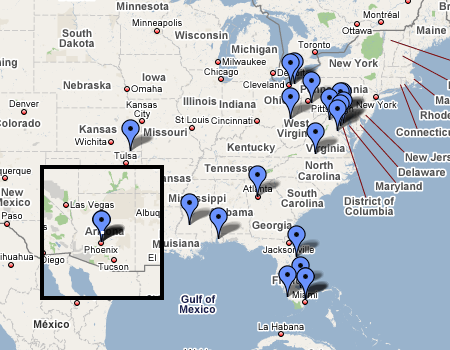 Well, thankfully, the arguably misplaced emphasis on Ohio is gone. But, as we give up on Ohio, we surrender western Pennsylvania -- to the tune of exactly 1 signing. Think about what happened between 2007 and 2008: we lost to Pitt. On the biggest stage of the regular season. Yet, we still won a BCS bowl game. Against Oklahoma. If the former staff couldn't overcome a loss to Pitt in recruiting our biggest hotbed, why trust them to recruit anything else?

Seriously, while the loss to Pitt was cripling, they were still a team that was sitting at home for the holidays, a team that hasn't won a bowl game since 2002. We're a program that has won two BCS bowl games in the last three seasons. Just pitiful.

And that one recruit (Tyler Urban)? That was secured by HCBS, long after the Rodriguez dust had settled. He was even a former Maryland commit, so certainly no middling prospect. While we had some WPIAL verbals before the coaching fiasco, their leaving the class is an example of exactly how much faith they had in WVU. Not much. 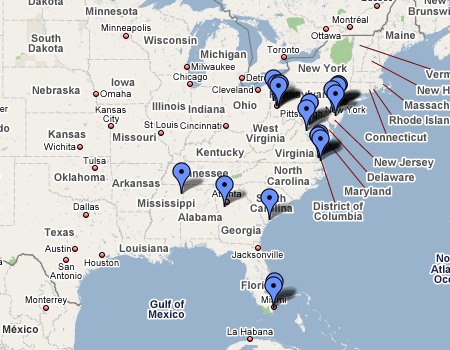 Ah, a return to logic.

While this is very early -- not to mention a list of offers, not commits -- the maps shows WVU returning to it's recruiting hotbeds: western Pennsylvania, New Jersey, and Florida. In the face of adversity, why not return to where the brand "West Virginia" resonates the loudest. Not to mention the fact that our assistant hires establish a strong presence in all these areas.

The one wrinkle? Tidewater, Virginia and Chris Beatty. From the names we've already offered, Beatty and WVU mean business in SE Virginia. And the comments from those recruits? They're high on us, too. It's also a close enough territory that WVU still makes sense in a high school kid's mind.

The formula seems so simple: hire good recruiters with an emphasis on those who specialize in areas accustomed to WVU. I just wonder why someone else didn't think of it between 2001 and 2007.