Share All sharing options for: Let's Play The Coaching Feud 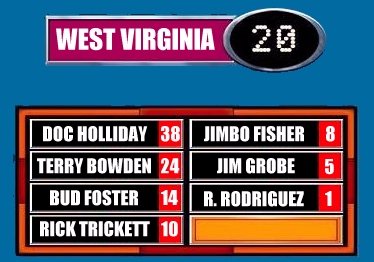 OK, shit has officially hit the fan. The WVU program, today, has become the center of unrest in the college football world. That's saying something considering Arkansas still exists as a state and university. This has been an absolute mess. Unfortunately, until either 1) a new coach is hired; 2) the athletic department is fired; or 3) I drop a ton of acid, this isn't going to get any better. While we focused on the athletic department earlier today, let's take a look at the coaching carousel.

And since everything is so peaceful on the home-front, I figured doing this Family Feud style would be appropriate...

One of the absolute best recruiters on the planet. Seriously, just look at the list of players he has recruited/coached. Considering the school and positions he's coached, that's a strong list. He has fantastic connections in high schools throughout Florida (and beyond). Holliday has experience with the spread, coaching under Urban Meyer since he came to Florida. He is also probably the only candidate on this list that could fend off advances from other coaches trying to poach our recruits. The odds on favorite.

Easily the fan favorite. Certainly has more name recognition than Holliday. Unfortunately, has been out of coaching for the better part of a decade. That will translate to a tough transition both on and off the field. Tough to recruit when you haven't been in a high school since 1998. Bowden's last name also has much less cache as it might have in 1998. Still, Bowden has a groundswell of support which might be enough to sway the University.

Directed one of the most consistently dominant defenses in the country since he became defensive coordinator at Virginia Tech. Foster would restore the defensive presence in Morgantown. While he's never been a head coach, his defenses have seen very little fall-off from year to year. Foster, though probably an underdog to Bowden, is likely the 2nd best candidate for the job.

One of the marquee assholes in all the land. While he is a fantastic offensive line coach, his credentials for head-coaching job are scarce. By interviewing for the top job, he may be in line for a bigger role on a new WVU staff. Would be a great compliment to a potential Doc Holliday staff.

If Rich had made this decision two weeks ago, Fisher would be towards the top of the list. Unfortunately, he is locked into the head coaching position at Florida State. The only real draws are a return to his home state and the chance to coach now, rather than later.

Easily the best coach on this list. If he were to have any interest in WVU, he would instantly jump to the top of the list. A native of Huntington, his current ties to the state don't seem to be too strong. A darkhouse, buy a boy can dream.